The updated Subaru Outback is available with a new diesel automatic gearbox, which costs £1,500 more 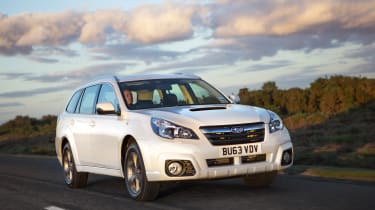 Subaru has been building rugged off-road estates for years, and that expertise is clear to see in the latest Outback. All of the changes for 2014 are positive ones and the CVT gearbox is less intrusive than you might expect. But for all the practicality and mud-plugging talent that will make it perfect for some, the Outback still has familiar weaknesses that sadly mean it falls short of its more rounded mainstream rivals.

The Subaru Outback is a strong seller for the brand, and even though the marque has been struggling lately, it reckons that a new diesel automatic version could hold the key to unlocking its wider appeal, and it arrives as part of an extensive 2014 facelift.

In fact, Subaru believes that there is such high demand for a self-shifter in this niche segment that it expects the new Lineartronic CVT to make up 75 per cent of all sales. Although the new transmission costs £1,500 more than the six-speed manual model, and there are small penalties in terms of economy and CO2 – which are 44.8mpg and 166g/km respectively – the auto comes with no sacrifices to the performance, with the 0-62mph benchmark sprint still taking 9.7 seconds.

While CVT transmissions are not normally known for their driver engagement, the Lineartronic gearbox is actually well matched with the smooth and refined 2.0-litre ‘boxer’ diesel. It has chunky plastic paddles on the steering wheel for seven stepped ‘manual’ changes that give you an extra feeling of control over the revs, and it had no problem pulling us up several steep hills on our mixed test route. This engine is not the most powerful diesel around and power delivery is quite gradual rather than immediate but it has a relaxed and flexible charater that suits the high-riding setup.

There are occasions where you still miss the finesse of manual changes, but as long as you’re not too demanding with the throttle the auto Outback is quite a calming thing to drive. The suspension has been retuned for 2014, and while it still feels stiff enough to resist body roll when cornering, the low-speed ride has been much improved. Tackle a rutted country lane and it can surf over cracks and cambers with aloof comfort and the four-wheel drive system gives complete confidence that the Outback will grip in any conditions.

That means none of its prized off-road and towing ability (It can haul a 1,700kg trailer without breaking a sweat) has been lost, however, and as a complete package the Outback still struggles to truly convince. This facelift has added styling tweaks like titanium grey alloy wheels and an even more uncompromising new front-end, and inside there's a bright new colour trip display nestled between the redesigned analogue dials but both interior and exterior designs still feel a little old hat.

The cabin is let down by hard plastics and a dated digital clock that appears almost the same as when the car was first launched in 1996. Sadly the price difference between this and more desirable (if less rugged) competition like the Passat Alltrack and Honda CR-V is too small to warrant the steep drop in interior quality.