For those who value ultimate efficiency over performance, the Baleno mild hybrid won’t disappoint; it proves cheap to run around town. The Boosterjet petrol is much punchier and more relaxing to drive, however, and is more refined at speed. You’re also limited to the top-spec model with this hybrid version, which makes the value of the entry-level Baleno difficult to ignore.

We’ve already been impressed with the Suzuki Baleno in 1.0-litre Boosterjet turbo guise, but the brand also offers a Suzuki Baleno SHVS mild hybrid. Is it worth considering?

While the petrol-electric system itself is new to Suzuki, the petrol engine it’s paired with is the familiar naturally aspirated 1.2-litre Dualjet unit you’ll find in the Swift. 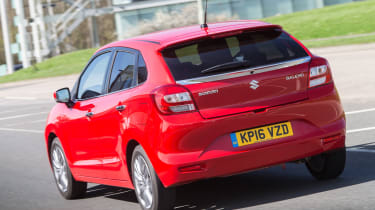 It uses an integrated electric starter motor to assist the engine during moderate acceleration, helping it to consume less fuel. The set-up also provides power for the on-board systems thanks to regenerative braking. The Baleno SHVS claims to emit 94g/km of CO2 and return 70.6mpg. That can’t match a Toyota Yaris Hybrid, but it’s still one of the most efficient petrol superminis on sale.

It’s a very simple system to produce, so it doesn’t bump up the price, but the engine needs to run at all times. It doesn’t provide a significant power boost, either; the SHVS takes 12.3 seconds to cover 0-62mph – almost a second longer than the Boosterjet - but the gap feels much bigger than that.

With just 120Nm of torque on offer, it doesn’t give the same mid-range grunt. This harms real-world efficiency, but take it easy and you can nudge 60mpg. Even so, it’s quite noisy on the move and not as refined as the regular petrol model; you can hear the starter motor whine at low speeds. 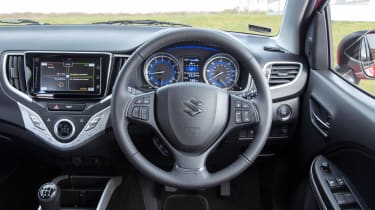 The Baleno hybrid is even lighter than the Boosterjet, meaning it’s better to drive than you might expect, with the same agile handling on the road. There’s quite a bit of body roll, and the ride can get unsettled on really rough tarmac, but overall it’s comfortable and pleasant.

It retains the standard Baleno’s strengths inside, too, offering impressive rear seat space and a big boot, but the mild hybrid is only available in top-spec SZ-5 trim, giving it a starting price of £500 more than the Boosterjet. Still, you get loads of kit, such as climate control, sat-nav, DAB radio, adaptive cruise control and active city braking.