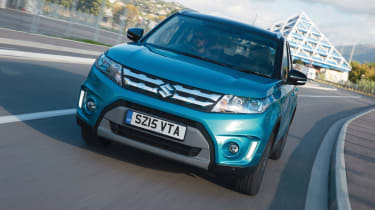 The Suzuki Vitara may not have class-leading economy and performance, but there’s a charming simplicity and ruggedness to it. The petrol engine is around £1,500 cheaper than the diesel, so it’s good value if you don’t cover big miles, but we’d stick with a more affordable mid-spec car. Throw in trendy looks and the Vitara is a safe bet for those who want to enjoy all-year driving.

Suzuki has high hopes for its new Vitara, which aims to bury the old car’s dated image once and for all thanks to a blend of distinctive looks and value-for-money positioning. Preferring to keep things simple, the brand offers just one diesel and one petrol engine in the Vitara – and it’s the latter we’ve tried for the first time in the UK.

The 1.6-litre petrol makes a strong case for itself, even if the diesel is more punchy and efficient (with an extra 164Nm of torque and 17mpg better economy). 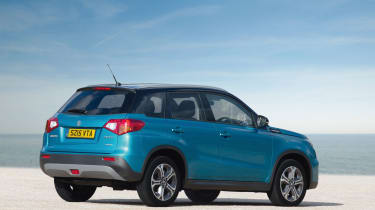 It does without a turbocharger, but gets the same 118bhp output as the diesel and loves to be revved – which is just as well, as with just 156Nm of torque, you need to work the engine hard to get the most out of it.

That’s no bad thing, though, as the standard five-speed box has a light yet precise action, and under hard acceleration, the car feels quicker than the quoted 0-62mph time of 12 seconds. Suzuki claims 50.4mpg economy and 130g/km CO2 emissions – on par with rivals like the Peugeot 2008.

On the move, the engine is hushed, with the only real noise being the wind whistling around the door mirrors. The Vitara is also one of the sportiest cars to drive in its class thanks to well weighted and accurate steering and little body roll. But the ride is firmer than the diesel, making it the one to go for if you value handling fun over comfort. 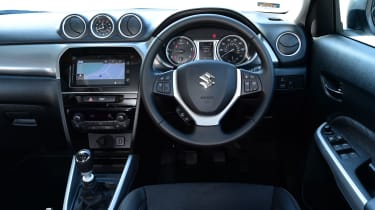 Inside, the Vitara isn’t built from the best-quality materials, but it’s all screwed together well and all models are generously equipped. Our top-spec test car had LED headlamps, Radar Brake Support auto braking and a panoramic sunroof. And while the 375-litre boot isn’t quite as big as an SX4 S-Cross’, it’s 21 litres larger than a Nissan Juke’s.