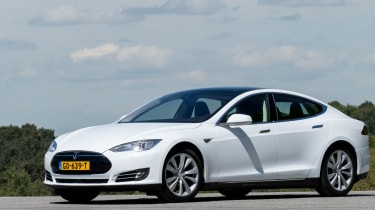 Tesla Model S owners will soon be able to listen to millions of music tracks for free in their cars, thanks to a partnership with music streaming service Spotify.

An update to the car's software will add a premium account for the service, which allows owners to choose music from a large library of popular tracks - and stream them into the car. The driver can even select music using voice commands while on the move.

Spotify is an online music streaming service that plays adverts in between songs, but since Tesla owners will get a premium Spotify account the in-car streaming will be ad-free. The account in the car will be tied to that vehicle though, so users with an existing account will still need to pay for premium access outside their Model S.

Last month Tesla recalled all 90,000 cars to fix a potential problem with the front seatbelt. The brand also recently launched an autonomous driving mode that was applied to its cars in a software update.

A new Tesla Model 3 is on the way, and we expect it to make its debut in March, probably at the Geneva Motor Show.

Are you a Tesla Model S owner? Will you use the Spotify service? Let us know below...