Toyota reveals its new Century, the latest edition of its luxury saloon planned for release in 2018, but not in the UK 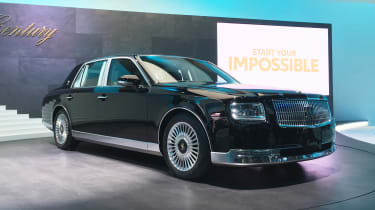 Toyota has revealed the third installment of its flagship Century saloon at the 2017 Tokyo Motor Show. If you aren’t a petrolhead you may be unfamiliar with this luxury Toyota – due to it not being sold in the UK – but to put you in the picture,  the two previous Toyota Century models offered big, powerful engines in a ‘V’ configuration, interiors comfier than a room full of pillows and so much legroom Peter Crouch could travel in comfort.

The information released by Toyota suggests that the new Century will infuse up-to-date technology with a classy exterior, similar to that of its predecessors. An example being the 5.0-litre V8 under the bonnet, which has done what any environmentally conscious 5.0-litre engine should, and paired itself with an electric motor to improve fuel economy. 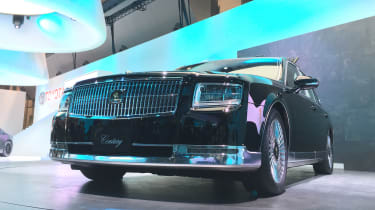 Up front, there is a sweeping dashboard with the controls laid out in a dignified manner. Venture to the back and passengers are provided an LCD control panel to fine tune the AC and audio system – which consists of 20 speakers. On top of this, occupants are treated to massaging seats with 100% wool upholstery, leg rests which are of course powered, and a large screen for entertainment purposes. Toyota has also included a reading light, which the Japanese marque has said can be used for ‘business or pleasure’ – come Toyota, get your mind out of the gutter…

Similar to its more extrovert European rivals, such as the Mercedes S-Class and BMW 7 Series, the Century's dimensions are somewhat boatish. They are so large in fact, that given another 55mm lengthways you could park two smart cars in its footprint.

As yet, there has been no confirmation of prices, or when the Century will be on sale in Japan, other than that buyers should expect it in mid 2018, but the chances of it making landfall in the UK through official channels are extremely slim, which is a shame..

What do you think of the new Toyota Century? Let us know in the comments below...