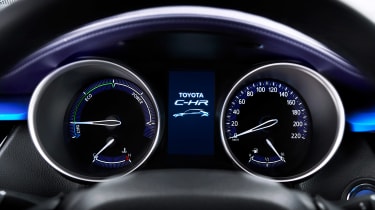 The Toyota C-HR crossover will cost from £20,995 when official sales start in January. Prices rise to £27,995 for the hybrid model in range-topping Dynamic trim.

The new model shares the latest TNGA platform with the 2016 Prius, and when fitted with Toyota’s latest 1.8-litre hybrid system is said to emit less than 90g/km of C02, an unrivalled figure for the class. Alongside the hybrid version, the new model will also be available in the UK with a 1.2-litre, 114bhp turbocharged petrol engine with either a six-speed manual or CVT gearbox – the latter available with optional four-wheel drive. 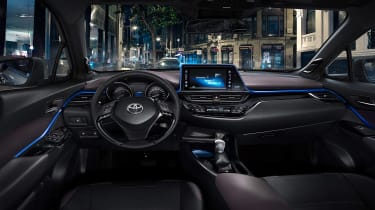 A conventional gear shifter is mounted in the high-set centre console. Adding a little pizzazz though is a blue styling line which runs across the whole fascia and back along the inside of both doors. Elsewhere the cabin is mainly constructed of dark black plastic, although there's some shiny piano-black on the steering wheel and door cards. Dark leather seats complete the look but Toyota has confirmed that this black and blue finish won't be the only option for the interior - Dark Grey and Black/Brown will be available too. 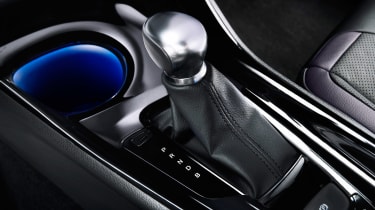 The final design of the C-HR – which will take on rivals like the VW Tiguan and Nissan Qashqai – stays true to the concept versions that have been revealed previously. It’s said to combine the powerful lower sections and raised stance of an SUV, with the slim and sleek cabin profile of a coupe. Toyota describes the eye-catching styling as having a ‘diamond architectural theme with prominently projecting wheel arches to emphasise strength and rigidity’. 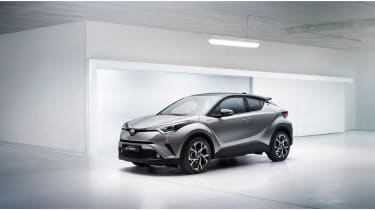 As part of the promotional campaign for its new crossover, Toyota recently announced that a racing version would compete in the classic Nurburgring 24hr race in May this year. It will be part of a three-car Toyota factory team that also includes the Lexus RC and RC F.

What do you think of the new Toyota C-HR crossover? Let us know in the comments below...