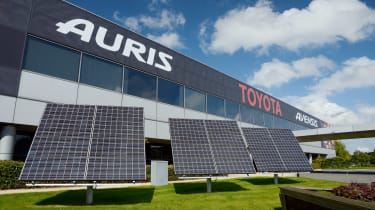 Toyota's UK factories face an uncertain future after the company's chairman admitted they needed to consider "how to survive" in the face of Theresa May's Brexit plans.

The firm's site at Burnaston, which manufacturers the Auris and Auris Hybrid, and its engine production facility in Deeside, must find a way of remaining competitive after Prime Minister May said the UK would leave the single market.

Article 50 will be triggered in March with a full exit expected by early 2019 and if a trade deal is not in place, car makers could be hit by huge tariffs when exporting vehicles to the EU or importing parts from suppliers.

Takeshi Uchiyamada, chairman of Toyota, speaking to the FT, said: "I won’t say that there is no impact to the company. We have seen the direction of the Prime Minister of the UK, [so] we are now going to consider, together with the suppliers, how our company can survive."

Fellow Japanese car maker Nissan has already received guarantees from the Government over its Sunderland plant and while there's no indication Uchiyamada wants similar terms for Burnaston and Deeside, he's optimstic Toyota can stay in the UK.

He added: "We are considering and discussing with the Government how to maintain the competitiveness and therefore through these kinds of communications we have with the Government, our hope is that we will be able to draw a bright future for the continuing existence of the plant."

In a statement clarifying the company's position, a Toyota UK spokesperson said: "If the business environment changes then we must continue with our efforts to maintain and improve competitiveness. This means we will need to continue to work with the wider UK automotive industry and the Government in order to help secure sustainable growth. Continued access to markets in Europe and vice versa without tariffs or bureaucratic obstacles will be important elements in supporting these efforts."

The rest of the car industry is also considering where its future lies in the wake of the latest Brexit announcement with SMMT chief executive Mike Hawes stressing the need for free trade.

Hawes said: "We need Government to deliver a deal which includes participation in the customs union to help safeguard EU trade, trade that is tariff-free and avoids the non-tariff and regulatory barriers that would jeopardise investment, growth and consumer choice.

"Achieving this will not be easy and we must, at all costs, avoid a cliff-edge and reversion to WTO tariffs, which would threaten the viability of the industry."

A spokesman added: "We continue to work closely with the UK Government to highlight the importance of obtaining tariff and customs free trade with the single market as the UK prepares to negotiate the terms of its withdrawal from the EU.

"Jaguar Land Rover believes these objectives are in the best interests of our customers, employees and the economic prosperity of both the UK and EU."

What do you think the future holds for UK car manufacturing when the UK leaves the single market? Join the debate in the comments...