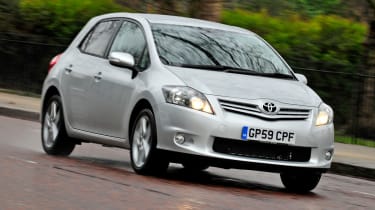 The Toyota Auris may not be the most exciting family hatchback that money can buy, but it is a practical and dependable choice. Solidly built, generously equipped and backed by a five-year warranty, the Auris appeals to the head rather than heart - buyers wanting upmarket glamour or the ultimate driving thrills should look to the VW Golf and Ford Focus instead. A limited engine line-up also restricts the Toyota’s appeal, although the petrol/electric hybrid version promises supermini-rivaling running costs.

Light controls and decent visibility make the Auris easy to drive, but it lacks the flair and fun of the Ford Focus. The Toyota also suffers from a limited engine line-up, with only the smooth 1.33-litre and 1.6-litre petrols, plus an economical but slow 1.4-litre diesel to choose from. All units are mated to a slick six-speed manual, with the option of six-speed auto on the larger petrol and diesel. There’s also the HSD hybrid, which uses the same 1.8-litre petrol and electric motor combination as Toyota’s bigger Prius. It’s relaxing to drive and runs near-silent in electric mode at low speeds, but lacks the punchy performance and excellent fuel returns of the VW Golf Bluemotion.

Even the diesel-engined Auris fails to shine in the fuel economy stakes. Despite its small size and lowly 89bhp power output, the D-4D unit returns only 58.9mpg and emits a surprisingly high 128g/km of CO2 – figures that are easily beaten by a VW Golf 1.6 TDI. Still, the Auris HSD hybrid dips well below the 100g/km threshold, meaning you won’t pay for an annual tax disc and will be exempt from the London congestion charge. All versions benefit from the brand’s five-year warranty, although weak residuals means the Auris won’t be worth much by the time the guarantee expires.

Conservative styling means that both three and five-door versions of the Toyota Auris means it lacks kerb appeal and fails to stand out from the crowd. Still, all versions benefit from standard fit alloy wheels, while the range-topping SR gets a racy tailgate-mounted spoiler and menacing black surrounds for the headlamps. Distinctive blue badges mark out the petrol/electric HSD hybrid. The cabin is well built, although some of the plastics look and feel a little cheap. There’s plenty of equipment, though. Air-conditioning and remote locking feature throughout, while desirable additions such as Bluetooth and cruise control are fitted to TR models and above.

It’s clear Toyota has put some thought into the Auris’s family friendly layout. The cabin is surprisingly roomy and benefits from a completely flat floor in the rear. Access to the rear is tight on three-door cars, so the five-door is a better bet for growing families. However, all versions benefit from plenty of cubby space littered around the cabin, including a neat double decker glovebox arrangement. There’s also a class competitive 354-litre boot, plus a split/fold rear bench that can be folded flat at the touch of a button.

A five-star EuroNCAP safety rating is taken for granted in this sector, and the Auris is no exception. Seven airbag, ISOFIX child seat mountings and anti-whiplash head restraints feature throughout the range. However, you’ll have to pay extra for ESP, which comes as standard on the VW Golf and Ford Focus. Toyota has a hard won reputation for reliability, so the Auris should provide years of trouble-free motoring. But for added peace of mind, there’s also the reassurance of the brand’s five-year, 100,000-mile warranty.