Toyota Auris gets new look to show off in Geneva 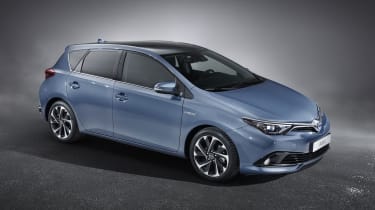 After Toyota recently revealed a mid-life makeover for its Avensis range, the firm has announced it will also bring an updated version of its Auris family hatch to the Geneva Motor Show. The Ford Focus rival will get subtle exterior tweaks and a more upmarket interior, new safety tech and a more efficient engine range.

The second-generation Auris has only been on sale since 2013, but already Toyota feels the need to revamp the range to give it a fighting chance against the raft of facelifted competitors like the Focus, Honda Civic and Hyundai i30. We can expect the new Auris to come to the UK in early summer 2015. 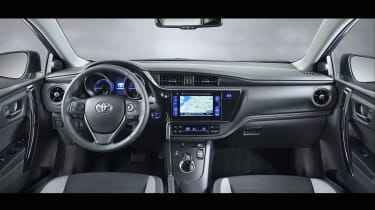 Despite the presence of these rivals, exterior changes remain relatively subtle, but the images show a sharper front grille design and lashings of extra chrome. The rear isn't shown in the pictures, but we can expect lightly rejigged tail-lamps and a smarter bumper.

Where the changes will be felt most is in the cabin, which will get a host of updates including classier materials, new technology and Toyota's 'Safety Sense' active safety systems. That'll bring features such as front crash assist, advanced radar cruise-control and rear cross-traffic detection.

The Toyota also promises a new range of engines that will boost performance and efficiency, but hasn't confirmed exactly what we can expect. What we do know is that the hybrid powertrain will remain largely unchanged.

Are you excited about the facelifted Toyota Auris? Let off some steam in the comments section below...