A hand-me-down car is the ultimate money saver as they are usually free. We've run one for three years on peanuts to see what it costs 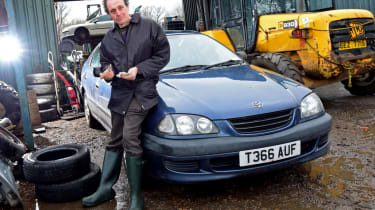 A free car trumps many cheap finance deals and scrappage schemes, and not only that, but this ancient form of motoring can be equally reliable, too.

Hand-me-down cars are the motoring equivalent of receiving your older sibling’s clothes. Like a well-used sweater, these motors can still have plenty of miles left in them. To see what ‘free’ motoring can offer, we spent three years and nearly 50,000 miles with a 1999 Toyota Avensis 1.8 GS given away by a family friend.

When this Avensis first came out, competitors at the time such as the Ford Mondeo and Peugeot 406 were better to drive and more fun to own, but the Avensis has stood solid through the test of time. 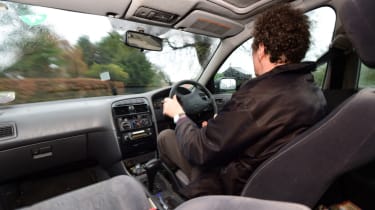 Our Toyota had been owned from new by a rural Kentish family. After the first owner died, his daughter used the car as a hack for local driving, but ultimately it sat on her drive for months, out of MoT and covered in leaves. This is when we were approached and asked if we’d be keen to take the car for no charge.

Aside from a small flat spot during acceleration, it pulled well, the exhaust didn’t blow and the heater worked. It had 139,000 miles on the clock, but the steering and brakes felt tight, suggesting there’d be no immediate bills to eat into our bank balance.

Outside, the only thing we spotted was a slightly dented front, with the rest of the body looking clean. The interior was well looked after, too, and the car also came with excellent new winter tyres to tackle even the worst the weather could throw at us. A lot of potential for a free car – so we agreed to accept it.

After getting home, we started the Avensis again and squirted the engine with water from a plant sprayer, resulting in a shower of sparks from the plug leads and a brief misfire. Changing the leads fixed the flat spot, and after a check over the car sailed through its MoT. Thinking it wouldn’t be around for long, we began driving the Avensis, and kept driving it – because it kept going.

Averaging around 15,000 miles a year, the Toyota has been used for everything from local shopping trips to 300-mile-a-day motorway and A-road journeys. The engine isn’t overly thirsty, with average fuel economy hitting around 30mpg, and doesn’t use too much oil. We’ve also found it pretty quiet, and the three-speed plus overdrive automatic has been smooth and quick, although the overdrive was initially slow to kick in on brisk winter mornings.

For a car that’s 19 years old, we were expecting to encounter more issues and repairs than we have so far. We changed the oil and filter every 5,000 miles, for about £20 a time. A battery was £50, and around £30 was needed to replace and fit a cooling fan actuating switch. We spent another £150 on a new cambelt kit 17,000 miles ago. An expiring water pump cost £70 to replace, and another £70 was spent on new front brake pads six months ago. 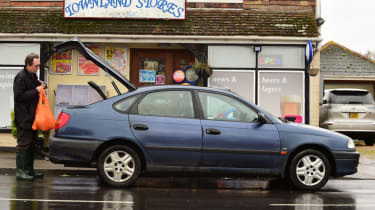 When the rear end became bouncy, we sourced a pair of used coil over shock suspension towers for £60, fitted for £50 by a local garage. This year about £100 was spent on new plugs, leads, filter and external drive belts. Add that together, and that’s just over £21 a month – or about £260 a year – for servicing. There are quite a few new cars that will cost more than that to keep running each year.

Inside, the only bits of kit that have gone wrong are the air-con and sunroof, neither of which is working. It’s still comfortable and economical – everything from the cassette player (using charity shop cassettes) to the ABS is fine, and despite the tester’s sneer, the Avensis keeps getting through its MoT year after year.

Only recently have we arrived at a crossroads. The power steering has become lumpy, due to a sticking hydraulic valve in the rack. The scrapyard is offering £150 for the car – so it’s worth more in recycling than when we got it. But a reconditioned rack is £85, and a local mechanic is quoting the Toyota’s scrap value to fit it. It’s madness, but our free car has been so faithful that we’re sorely tempted to resurrect it. 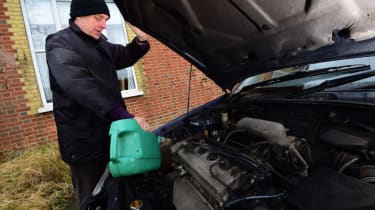 If our experience shows anything, it’s that old bangers shouldn’t be discounted or sent to scrap just because they look a little worse for wear. There are plenty of cars going for peanuts that represent real value for money if you find the right one.

If low running costs are what you are after, why not take a look at the cheapest cars to run? 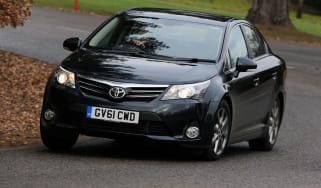 We're already a couple of facelifts into the Toyota Avensis, and the Ford Mondeo and Mazda 6 rival is showing its age
Visit/toyota/351882/toyota-latest-car-maker-suspend-production-over-coronavirus

In a bid to help contain coronavirus, Toyota has closed factories across Europe
Visit/subaru/107076/subaru-unveils-mysterious-new-electric-suv-concept-at-electrification-conference

Subaru has revealed an unnamed concept SUV, which could be based on the brand’s forthcoming all-electric underpinnings
Visit/toyota/108835/toyota-announces-new-kinto-services-including-car-sharing-and-pooling-for-customers