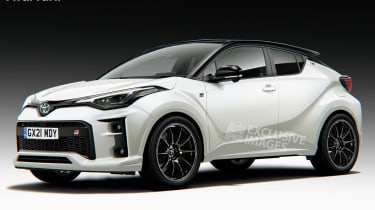 Toyota Gazoo Racing will soon build a performance version of the C-HR compact crossover, called the GR C-HR. The tuned SUV is expected to arrive before 2023, although it remains unclear whether this project will be squeezed into the life cycle of the current car or form part of the second generation, which is due by the end of 2021.

Toyota’s decision to build a high-performance crossover will no doubt anger the purists. But, such a model will give Toyota Gazoo Racing an important foothold in the increasingly populated performance SUV market. Volkswagen recently launched the 296bhp T-Roc R; Hyundai’s N division is readying its tuned Kona crossover and Ford is lining up an ST version of the new Puma.

Like the forthcoming GR Corolla, we expect the GR C-HR will use a de-tuned version of the turbocharged 268bhp 1.6-litre three-cylinder petrol engine fitted to the new GR Yaris. In developing the engine for the GR Yaris, Gazoo’s engineers have had an eye on installing it elsewhere – not least because the company wants to recoup the intensive costs involved.

Crucially, a senior Gazoo Racing executive has told Auto Express that the unit “can be used in other applications” and that it “can be offered in more than one state of tune”. He also conceded that this was “not an engine that had to be built” for the GR Yaris to exist – a hint that it will indeed go on to have a wider range of applications.

The GR C-HR crossover will continue to be based on Toyota’s TNGA underpinnings, which should form a good basis for a performance SUV – albeit with a handful of upgrades. The platform features multi-link suspension and will likely be supported by new dampers, uprated brakes and lighter alloys.

Do you think the Toyota GR C-HR will be good enough to take on the Volkswagen T-Roc R? Let us know in the comments section below…