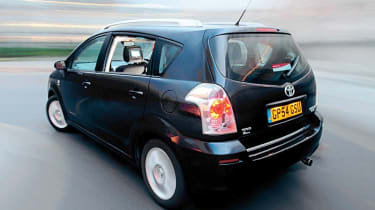 I was like a child on Christmas morning when I heard I would be running our long-term Toyota Corolla Verso. The recent TV adverts had whetted my appetite, with the all-action windsurfer dad braving the elements as his family enjoyed the in-car DVD player.

I would like to think that I identified with the musclebound sportsman on the windsurfer - but there aren't many places in London where you can be towed across the waves by a jetski. In reality, I was much

more interested in the optional DVD player and ample load space. The Verso has more than lived up to expectations. The flexibility of the seating is fantastic for a young family, and the option to fit a couple of extra people into the two retractable seats in the boot space can be the difference between taking one or two cars on a family day out.

Kids love using the rear chairs, so the Verso is ideal for their birthday parties and school runs. but with a quick lift of the beautifully simple seat catches, you have room to stow a large wardrobe. Or, indeed, your windsurfing board.

Last week, the Verso passed its first heavy lifting task, as I squeezed a double bedframe into the back. I expect colleagues to be after the keys on a regular basis once they realise the sheer amount of space the newest member of our fleet has to offer. The twin DVD screens in the headrests are as popular as we anticipated. Long car journeys to distant grandparents have become something to look forward to, rather than dread.

Calls of 'Are we there yet?' have been replaced by 'Are we going yet?' as my five-year-old son decides whether to watch Thunderbirds or Toy Story on the way to his grandma's house. He settles in the back with wireless headphones on and does not make a sound. Unlike the headphones, which were really noisy, until we worked out where the volume control was - it's built into the side.

No matter how popular the DVD is in the back of the car, though, there are some minor irritations from the front. The player is mounted right under the driver's seat, so every time you want to change the DVD you need to stop, get out, reach under the chair and fiddle with the controls. And when it's dark and snowing, this is no fun at all.

Which is why my son now knows Thunderbirds The Movie word for word, having watched it three times on a loop during one long, snowy journey back into London. In short, the DVD is unnecessarily overcomplicated. The screens need to be switched back on every time you turn the ignition off to get petrol, while the remote control has more buttons than Apollo Nine. The Verso is a family car and could do with a simple dashboard-mounted player, with straightforward controls, as in our Honda Accord Tourer long termer.

One reason the DVD may be under the seat is the James Bond-style sat-nav system mounted in the dash. It looks like something straight out of Q branch, with a tilting touch-screen control that opens fully to expose the CD player, before folding neatly back into place with a hi-tech whirl.

I never used to like sat-nav, and wondered why people would follow a computer when an A-to-Z and a little grey matter would sort out a superior route. Now, though, I'm a convert.

The Corolla's system is simple to work, and it got me to a hospital appointment early, despite 80 miles of snowy roads and an accident that closed the M1 - genius! What's more, the driving position is very comfortable, with an attractive, uncomplicated dash layout. The climate control is especially well designed, with one knob to adjust the temperature, one to change the fan and a third to control the mode. And that's it!

So overall, the Corolla Verso is great. I think it does all the things you want it to do well, then surprises you with the unexpected. In fact, the only downside of the Toyota is one of its greatest successes - the DVD player.

I used to enjoy talking to my son in the car, and while silence on a stressful motorway journey may be golden, it's a shame to miss out on those in-car chats that fill you in on a five-year-old's weekly events. So the new rule is no DVD unless the journey time is more than an hour. That way, we get the best of both worlds...