The limited edition Toyota Yaris GRMN has entered the hot hatch fray, but is it a match for the Peugeot 208 GTi? 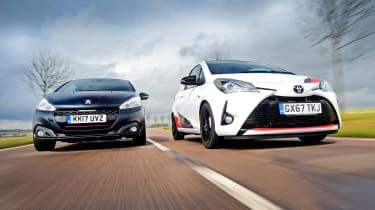 Britain has always been a haven for hot hatchbacks. Buyers here love the blend of hardcore performance and usability these models deliver – and none is arguably more hardcore than the new Toyota Yaris GRMN.

Small, sporty cars like this are perfect for twisty British roads, and this limited-run hot hatch offers vital specs that highlight this.

Never one to follow the crowd, Toyota does things its own way with the GRMN, but even so the car is matched by the Peugeot 208 GTi by Peugeot Sport when it comes to its focused set-up and the performance on offer.

One area where they don’t quite match is price; the Yaris is expensive. The question is whether it’s worth the money. 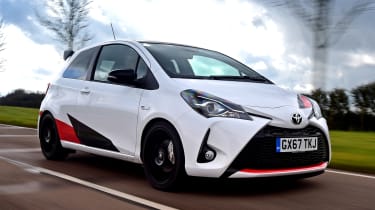 Toyota returned to the World Rally Championship in 2017 with its Yaris WRC – with some success, we might add – and this project partly inspired the Yaris GRMN hot hatch. That four-letter tag stands for ‘Gazoo Racing tuned by the Master of Nürburgring’, and highlights where the car has been partly developed and how serious Toyota is about the project.

Just because a car works well at the German race track is no guarantee it’ll succeed in the UK, but the Yaris is a riot on B-roads that challenge other hot hatches. There’s some stiffening for the structure, including a front suspension brace, while the car sits 24mm lower than standard to lower the centre of gravity and improve handling. On top of this, the GRMN has a thicker anti-roll bar and some bespoke Sachs dampers with firmer settings to match the stiffer springs. 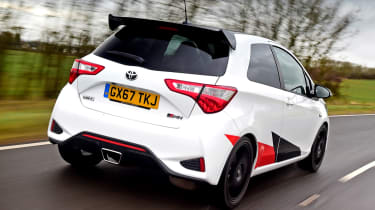 The result is a sweet-handling small hatchback that’s firm, but not unruly. The steering is geared exactly for the grip on offer, with the wheel adopted from the GT86 helping here.

The damping feels well tuned for most bumpy, bucking and broken roads, too. There’s a nice degree of flow to the suspension, especially at the top of its travel, soaking up inputs well so you can carry pretty impressive corner speed.

Only when you push very hard does the GRMN start to show its drawbacks. As the suspension nears the bottom of its travel it firms up and sometimes hits the bump stops with a thump, although it’s an exceptional circumstance. 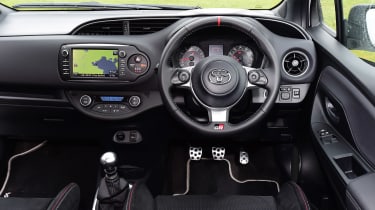 The 1.8-litre supercharged four-cylinder engine is unusual; most of the Toyota’s rivals copy the 208 GTi by using 1.6-litre turbo units. However, the Yaris’s engine is a peach. The linear response means it revs hard right the way through to its limiter, goading you into holding the throttle with a hard-edged whoosh from the free-flowing central-exit exhaust.

A Torsen limited-slip differential gives great traction out of bends, which boosts the Yaris’s agility as you squeeze the throttle on, tightening the car’s line. It feels better suited to the chassis than the Peugeot’s similar diff.

It also helps off the line, because the engine, gearbox and diff combined to help the GRMN sprint from 0-60mph in 6.1 seconds. However, even though it uses a supercharger, the 250Nm of torque is 50Nm down on the 208 and produced higher up at 4,800rpm; the Yaris couldn’t match the GTi’s figures – especially from 50-70mph in sixth, where it was 1.7 seconds slower. 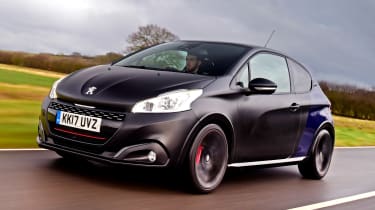 The 208 GTi has been upgraded throughout its life, and the updates for this Peugeot Sport version turned the car from an also ran into a real compact hot hatch contender.

Compared with the standard GTi, this more focused 208 has a 6mm wider track front and rear. It also sits 10mm lower and gets a bespoke geometry set-up. Firmer springs and dampers feature as well, to control the 18-inch wheels, wrapped in sticky Michelin Pilot Sport tyres. And there’s a Torsen limited-slip differential.

If you think that sounds like quite a focused set-up, it is. The Peugeot feels every inch the hardcore little pocket rocket, and you notice more vertical movements relayed to the cabin. 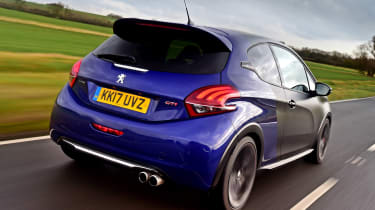 It feels firmer than the Yaris, with tauter damping that means you can ultimately lean on the 208 harder in corners, as the chassis and those Michelin tyres serve up quite a staggering level of grip for a little car, even in the wet.

The balance is sweet, too. As in the Yaris, lift off the throttle in the middle of a bend and you can bring the 208’s rear axle into play to tighten the car’s line, and with the small steering wheel and fast steering, you can always catch a slide.

This also means the Peugeot is impressively agile, turning in quickly. It’s firmer in everyday driving, although we still wouldn’t call it uncomfortable, thanks to the quality of the damping. And the trade-off is that superb level of control when you start to increase the pace.

The steering can feel unusual at first, but you get used to the speed. However, the diff doesn’t find traction as well as the Toyota’s. 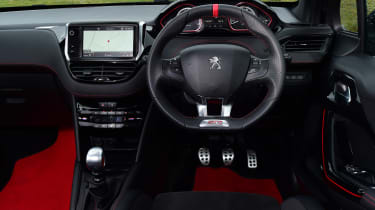 It sprinted from 0-60mph in 6.3 seconds (two tenths slower than the Toyota), but while the motor revs hard in the mid-range, it doesn’t feel as free at higher rpm, with a more droning note, too. The six-speed manual box’s crunchy gearchange isn’t as nice to use, either.

However, what can’t be ignored is what you get for your money. The 208 GTi is £2,745 cheaper than the Toyota, yet offers a similar level of kit. Alcantara sports seats, climate control, parking sensors, DAB radio, Bluetooth and a seven-inch touchscreen with Apple CarPlay are all included. You can use the latter for sat-nav, or add Peugeot’s set-up for £750. 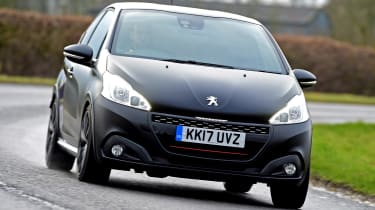 The 208 GTi by Peugeot Sport is a delightfully focused performance car. It does exactly what a small hot hatch should, delivering fun and usability in an affordable package with low running costs. The Yaris GRMN is a great effort, but the Peugeot still has the edge. 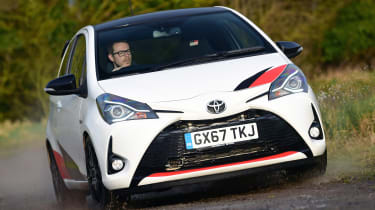 The Yaris GRMN is an accomplished hot hatch. The engine gives it real character which is reinforced by a talented chassis, but crucially, it feels fun. However, it’s hard to overlook that price tag due to the car’s limited status. Hopefully a more affordable Yaris hot hatch will follow.