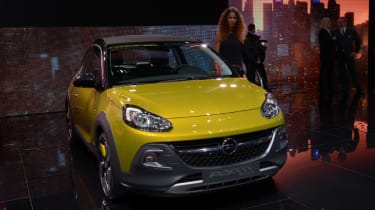 Vauxhall has revealed the Adam Rocks, a tougher version of the Adam city car. Revealed at the Geneva Motor Show, the Rocks manages to be both a jacked-up mini crossover and a convertible thanks to a peel-back roof.

The Vauxhall Adam Rocks sticks closely to the formula of the concept first previewed at Geneva last year, with a raised ride height and cladding to protect the bodywork. It’s taller and wider than the standard car, thanks to 15mm raised suspension and the protruding bodywork.

The revised front grille – which has a chrome bar running through it – is embedded into the cladding, while silver boomerang shapes wrap around the foglights at the front and back. A rear roof spoiler and LED running lights come as standard, and metal skid plates complete the mock off-roader look.

Changes go beyond the styling, though, with retuned suspension, recalibrated steering and revised rear geometry. Either 17 or 18-inch alloys are available, plus several new colours – including the Goldbusters Yellow seen on the car pictured. 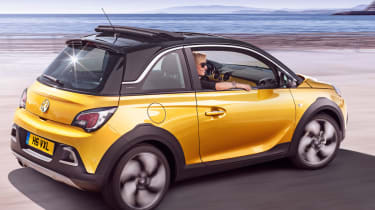 The Adam Rocks is available exclusively with a folding fabric roof – and the standard Adam will be offered with the same hood later in the year. The triple-layer roof slides back in five seconds at the touch of a button.

As with the Fiat 500C, which employs a similar roof system, it has no impact on the car’s stiffness – so the Rocks should be just as good to drive as the fixed-roof Adam.

There’s big news under the bonnet, too, because this is the first model with Vauxhall’s all-new 1.0-litre ECOTEC three-cylinder turbo. No efficiency figures are yet available, but the car has either 89bhp or 114bhp and a six-speed manual box only.

The new engine will soon be rolled out across the Adam line-up, and will feature in a range of other Vauxhalls including the new Corsa, due later this year. Two other petrol engines are also offered – a 69bhp 1.2 and a 1.4 with 86bhp or 99bhp.

Rocks interior combinations aren’t for the faint-hearted, with a choice of colour schemes including dark brown seats with bright blue stitching. For £275 you can have the Intellilink infotainment system, which features a seven-inch touchscreen capable of connecting with selected apps on your Android or iOS smartphone.

Prices aren’t yet known, but expect a premium of £3,000 over the regular Adam when the Rocks goes on sale in the summer.

Welcome to our Geneva Motor Show hub page, scroll down for all our Geneva content...
Vauxhall Adam review

With funky looks, too-cool-for-school model names and a bewildering range, the Vauxhall Adam is aimed at fashionistas
Vauxhall to resume production at Ellesmere Port site on 17 August