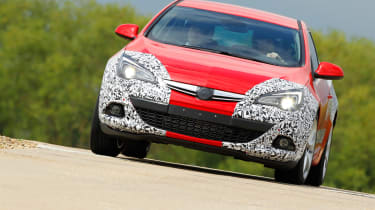 Vauxhall says it’s had to meet two unique challenges while developing the new three-door GTC. First, British drivers are among the hardest to please and two, our roads are among the worst in Europe… Fortunately, a new suspension system has ensured this car is great fun to drive, while its smooth styling ensure it’s just as good to look at. Though pricey – the entry level car costs £19,000 – this is Vauxhall’s best performance hatchback to date.

Is this the car that could put Vauxhall back on the road to glory? The Luton firm says the new GTC won’t just be the best looking car in its class, but the most exciting to drive too - and it’s so confident of those claims that it invited Auto Express to get behind the wheel of a prototype version of the newcomer, which goes on sale in November.
Even under the black and white disguise worn by our test car there’s no doubt that the Astra’s proportions and its swept back, LED-equipped headlamps help it stand out from the crowd. Entry-level models offer 18-inch wheels, while our test car wore wheel arch-busting 19-inch rims. Drivers after more road presence can plump for massive 20-inch boots – a unique offering in this class.

Video: watch CarBuyer's video review of the Astra GTC
[[{"type":"media","view_mode":"content_narrow","fid":"68711","attributes":{"alt":"","class":"media-image"}}]]
Inside, our prototypes were still “a work in progress” according to the firm’s engineers. But while the cabin is spacious and neatly trimmed, there’s not much to write home about in terms of visual flair. We’ve got our fingers crossed that there are improvements to the look of the dash in particular before the car is launched.
The GTC offers drivers four engine choices, including 120bhp and 140bhp 1.4-litre petrol units, plus a 180bhp 1.6-litre turbo and a 165bhp 2.0-litre diesel. Two trims are on offer, including an entry-level Sport and a range-topping SRi. A VXR version is under development too.
Prices start at £18,495 for the basic car, and top out at £22,430 for the most expensive diesel - that makes the entry-level version around £1,000 cheaper than a comparable Volkswagen Scirocco, and £200 more expensive than the more powerful, 130bhp Renault Megane Coupe.
Back on the test track, our 1.6-litre turbocharged SRi certainly sounded good once the ignition had been flicked on. The car has a different exhaust system to the five-door Astra hatch and its engine note is deeper and more purposeful.
With the throttle flat to the floor, the impressive 180bhp 1.6-litre engine feels responsive and smooth. It has enough power to propel the car from 0-62 mph in around 8 seconds and on to a top speed of 132mph. Brakes feel strong, and the gearshift is slick. Visibility through the tall screen is impressive too, a key component of any good driver’s car!
Under the skin the GTC is fitted with the same front suspension developed for the 325bhp Insignia VXR, while at the rear it gets an upgraded version of the Astra hatchback’s multi-link suspension. Vauxhall’s computer-controlled damping system, FlexRide, is also fitted. It helps provide even greater stability and grip, as well as three driving modes, including standard, tour and sport.
A lot of work has been done tuning the arrangement to suit UK roads, and it shows. As we tackled a series of tests, the steering proved accurate, and the car felt remarkably well balanced – particularly through fast and open bends. The test tracks we tried were too smooth to judge the quality of the ride, however, there was plenty of opportunity to make the most of the driver-focused handling.
Steering is accurate, and the car a lively performer. Best of all is the way that the car will break traction at the rear when driven really hard through a bend. On the test track, there was very little in the way of tyre scrubbing, speed sapping understeer.
You can be confident that the GTC will deliver on Vauxhall’s promise of being exciting to drive - and that the finished car will be stunning to look at. And it needs to be. Vauxhall is tasked with selling some 40 percent of all Astra GTC’s built - a tough target that if met will provide a huge boost to the cash hungry firm.
Share this on TwitterShare this on FacebookEmail