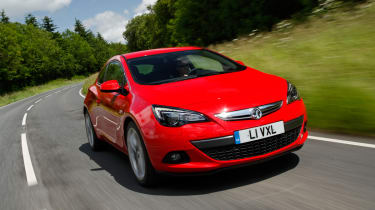 The Astra GTC deserves to be a success in the UK. Vauxhall’s engineers have spent a lot of time tailoring the ride and handling package to our roads, and the result is a car that drives with poise and control – as long as you go for the optional FlexRide dampers – and proves Vauxhall can compete with the best in class when it comes to handling. It’s a talented all-rounder, too, with great looks, an efficient engine and much more interior and boot space than key rivals such as the pricier VW Scirocco.

The sporty three-door Vauxhall Astra GTC is the manufacturer's answer to the VW Scirocco – and it’s finally arrived in the UK. We tested a disguised prototype petrol model in July, but now we’ve driven the 163bhp 2.0-litre diesel, which Vauxhall is tipping as the range’s best-seller.
The first thing that strikes you is the looks. The GTC shares only two exterior parts with the more sensible five-door version – the roof and the door handles – and everything else is lifted directly from the 2010 Paris Motor Show concept.

Video: watch CarBuyer's video review of the Astra GTC
[[{"type":"media","view_mode":"content_narrow","fid":"68711","attributes":{"alt":"","class":"media-image"}}]]
Aggressive details such as the wide front grille, flared wheelarches and optional 19-inch wheels mean it’s Vauxhall’s best-looking car for a long time.
Inside, though, you’re brought back down to earth. The concept car looks don’t extend to the cabin, which will be instantly familiar to anyone who’s driven the standard hatch.
That’s not necessarily a bad thing – it’s still well built and attractively laid out – but it doesn’t feel as special as it should in entry Sport trim.
However, plump for the pricier SRi version, and things are significantly improved. Bolstered sports seats and leather trim on the steering wheel and door panels help lift the interior, and the centre console is finished in a faux aluminium and carbon-fibre combination that’s much easier on the eye.
Under the pretty bodywork, a lot of work has gone into ensuring that the GTC is much sharper to drive than the standard car. The suspension is 15mm lower, with a much wider front and rear track, and even the wheelbase has been extended to aid cornering agility.
The HiPerStrut suspension system from the Insignia VXR is mounted at the front, and all of the major suspension tuning was done on UK roads.
That development work really shines through as soon as you take the GTC down a twisting back road. On the standard 18-inch wheels, the ride is firm, but well damped, doing a good job of soaking up the worst British tarmac has to offer.
Body control is excellent, too, and the GTC grips hard, hanging on well through tighter turns. Yet the electronic power steering – which also gets unique UK settings – doesn’t inspire a great deal of confidence. It’s weighty enough, but it doesn’t load up as you turn through corners, leaving drivers isolated from the action. With the optional (£790) FlexRide dampers in Sport mode, the steering has a more consistent weighting.
It’s easy to see why the 2.0-litre diesel we tried is set to be the best-seller. It may lack the rorty exhaust note of the turbocharged petrols, but with 350Nm of torque, the muscular in-gear performance more than makes up for it. It’s not the last word in refinement, but settles down to a quiet cruise when required.
And it’s hard to argue with an economy figure of 57.6mpg and CO2 emissions of 127g/km, particularly impressive on a car this focused. In diesel guise, the GTC is a talented all-rounder, and worthy of the hype.
Share this on TwitterShare this on FacebookEmail