Does the entry-level petrol Astra GTC measure up to the new coupe’s sporting image? 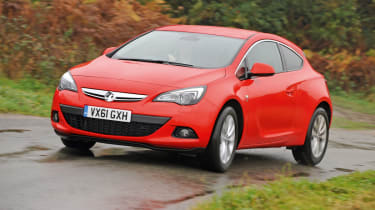 If you want ultimate hot hatch thrills, you should wait for the 276bhp VXR. But this 138bhp version of the GTC hits a sweet spot between price, economy and performance. Its wider track and suspension tweaks have made quite a difference, and the 1.4-litre turbo has the punch to make the most of the talented chassis. A spacious cabin and boot mean the Astra maintains its family car status despite losing two doors.

Vauxhall doesn’t want customers to think of the GTC as ‘only’ a three-door Astra. It’s billing it as an all-new car – hence the fresh name.
When we’ve driven it before, the GTC has lived up to its hype, but we’ve yet to sample the entire range. So now the smallest engine available has a chance to prove its worth. And even before we turn the key, the 1.4-litre petrol turbo seems to make sense.
Video: watch CarBuyer's video review of the Astra GTC
[[{"type":"media","view_mode":"content_narrow","fid":"68711","attributes":{"alt":"","class":"media-image"}}]]
It’s available with 118bhp or 138bhp. We drove the more powerful version, which strikes a fine balance between performance and efficiency, and sprints from 0-62mph in nine seconds flat – only a tenth of a second slower than the 163bhp 2.0 CDTI, which costs £2,085 more.

Economy of 47.1mpg and 139g/km CO2 emissions stack up well against the car’s main rivals, too. By comparison, the Renault Megane Coupe 1.4 TCe 130 claims 44.8mpg and 145g/km.
The Astra continues to tick boxes on the move. The engine revs sweetly and smoothly, and produces a pleasing growl thanks to a retuned exhaust. It can’t match the 178bhp 1.6-litre turbo for power, or the 2.0 CDTI for mid-range punch, but there’s enough performance to take advantage of the GTC’s well balanced chassis.
Vauxhall’s engineers have worked hard to distance the dynamics from those of the five-door, so the sportier Astra gets a HiPer Strut front suspension set-up lifted from the Insignia VXR.
It’s a similar system to that on the Ford Focus RS, which is designed to reduce torque steer, boost grip and improve steering feel. It works, too: the wheel weights up nicely as cornering loads increase, and doesn’t tug from side to side under heavy throttle – which bodes well for the 276bhp VXR model.
A longer wheelbase, wider track and suspension lowered by 15mm are all aimed at improving the car’s lateral grip and raising cornering speeds. Carry enough momentum into a bend and the front end sticks to the road and refuses to understeer, while body roll is minimal.
Our model wasn’t fitted with the optional three-stage FlexRide suspension (£790), but it’s not a necessity. The standard fixed-rate dampers deliver a firm yet well judged ride, as long as you stick with the standard 18-inch wheels. Optional 19 or 20-inch rims are available if you value style above comfort.
Overall the car feels more nimble than its five-door equivalent, but both the VW Scirocco and Megane Coupe are marginally sharper from behind the wheel.
The GTC has other cards to play, though. For starters the cabin is huge compared to rivals’. There’s acres of room for four adults, or five at a squeeze, and they can bring their luggage, too, as the boot is 200 litres larger than the Scirocco’s. In fact, with the rear seats in place the GTC’s load area is 30 litres bigger than that of the five-door Astra.
The interior is robust and functional, but unlike the sculpted exterior, which shares only door handles and an aerial with the five-door, it’s carried over virtually unchanged. If your wallet can stretch to it, we’d fork out the extra £1,165 over the Sport model for this SRi, which gets comfortable, well bolstered front seats and splashes of chrome and silver interior trim.
Despite its engineering overhaul, the GTC costs only £255 more than the five-door. This is impressive, but places the car too close to the more premium Scirocco, which could tempt more badge-conscious buyers. However, as Vauxhall’s best current model, it deserves to succeed – and this 1.4 turbo is the highlight of the range so far.
Share this on TwitterShare this on FacebookEmail