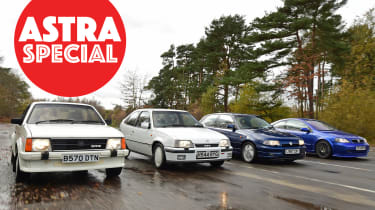 Vauxhall will most likely be one of the first brands that come to your mind when you think of the hot hatchback. Its performance division has evolved over the years, taking many names along with it. Whether you're a fan of the Astra GTE models from the eighties, the GSi Mk3 from the early nineties or you're more into the latest VXR variants, Vauxhall has always maintained a strong hot hatchback line-up.

This is where the story of the fast Astra begins. The GTE of 1983 finally gave Vauxhall an answer to the Volkswagen Golf GTI, and propelled the British brand into the mad, testosterone-filled hot hatch melee of the early eighties – a decade that the Mk2 GTE would see out.

Vauxhall took the standard three-door Astra and kitted it out with colour-keyed bumpers, natty-looking alloys, blistered arches, front and back splitters, a black-painted rear window surround and a pair of Recaro sports seats. 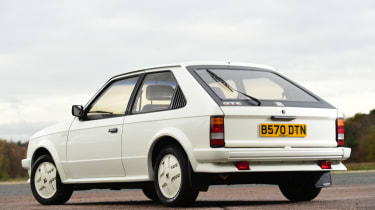 Under the very humdrum bonnet lies a 1.8-litre overhead-cam engine from the Cavalier SRi pushing out 111bhp – measly compared with today’s Astra VXR – with peak torque of 149Nm at 4,800rpm. It allowed the boxy GTE to do 0-60mph in 9.5 seconds and go on to a top speed of 115mph.

Get behind the wheel and it’s an old-school driving experience, with heavy, unassisted steering, a raspy engine and a tuneful exhaust note.

By the time the Mk1 GTE handed over the Vauxhall performance baton to the more teardrop-shaped Mk2 in 1985, the hot hatch market had changed – and grown. Now, along with the VW Golf GTI Mk2 and Peugeot 205 GTi, there were hot MGs, Lancias and various Fords such as the Escort XR3i and RS Turbo. 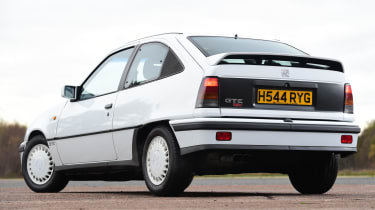 Vauxhall initially launched the GTE with 115bhp, but with the sector refusing to stand still it then offered a 130bhp 2.0-litre 8v engine. The cream of the crop came in 1988, though. The GTE 16v (right) stormed in with 150bhp and improved handling. It had 25mm-lower suspension than the regular 8v GTE, a wider rear track, bespoke dampers and thick anti-roll bars front and rear.

That engine made the GTE 16v more powerful than most rivals, and considerably more refined. It was also very quick – it weighed just over a tonne, its 0-62mph sprint took around 7.5 seconds and it could top 135mph. There was a cool digital dash to match the butch exterior looks, too.

The hot hatch bloodbath burst in the nineties. Soaring insurance premiums and high theft rates gave these potent cars a bad reputation, so the new performance hatches were allabout refinement and safety.

The Mk3 GSi may well have traded in some of the lairy performance associated with its predecessor, but it still packed an impressive arsenal. A 2.0-litre, four-cylinder engine gave 148bhp, a 0-62mph sprint time of 9.5 seconds and a 137mph top speed. 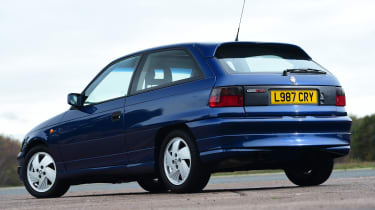 It pinched not only the Cavalier’s engine, but also a similar subframe carrying the front MacPherson strut set-up. It all helped the Astra Mk3 be more refined and quieter at speed than ever – and considerably safer in a crash. There was also standard-fit traction control.

Depending on your point of view, the exterior was less ‘loud’, too, with the Mk3 heralding the days of the quiet and unassuming hot hatch so typical of the nineties. That said, the hallmarks were there – chunky bumpers, five-spoke alloy wheels and a rear spoiler.

For fans of hot Vauxhalls at the turn of the 21st century, there were two types of fast Astra. The GSi 2.0 Turbo three-door was the natural choice, but the new millennium brought another, more interesting alternative: the Astra Coupé. 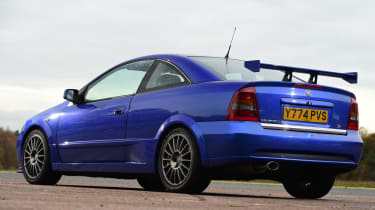 Designed by the Italian styling house Bertone, the Coupé was 15mm longer than the regular Astra and had 2mm lowered and stiffened suspension. Vauxhall’s British Touring Car Championship (BTCC) team run by Triple Eight Engineering (888) campaigned the Astra Coupé from 2001-04, and won every year. To celebrate the maiden victory, Vauxhall created a special edition (limited to 100), but it got more than just badges. 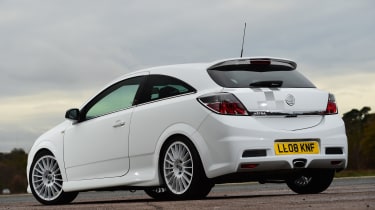 Vauxhall did the unthinkable in 2008 – it made the already-bonkers Astra VXR even faster. The ‘standard’ model arrived in 2005 and was a return to form for the company. Just like the classic Mk1 and Mk2 GTE Astras of the eighties, the 237bhp VXR went head-to-head with the VW Golf GTI and Ford Focus ST – beating them in a number of areas.

Three years later, Vauxhall turned up the dial to 11. Named after the fearsome track in Germany, the VXR Nürburgring added white paint, carbon fibre trim and a Remus exhaust. The system added up to 13bhp more and sounded great. Only 835 cars were made.

Vauxhall celebrated 25 years of British Touring Car Championship (BTCC) competition in 2015. The brand was a mainstay of the series, having competed as a works team from 1989 (with the Astra GTE) to 2009 (with the Vectra), before being independently represented since. 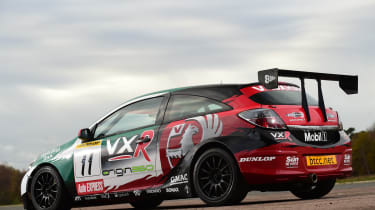 But while fast Vauxhall fans cherish John Cleland’s Cavalier, the Astra’s been the most successful car due in no small part to the Astra Coupé dominating the series from 2001-04. The 888-run Astra Sport Hatch took over in 2005, with this car campaigned by Fabrizio Giovanardi in 2006. 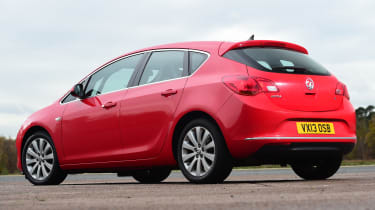 The Astra that was hurled around the old airbase circuit was a fairly basic 1.6-litre Tech Line, complete with DAB, Bluetooth and sat-nav. The only Top Gear modifications were a sturdy roll-cage and two racing seats with four-point harnesses.

Why did Vauxhall do it? An estimated 350 million viewers around the world, in 170 countries, got to see that the Astra was well made, built to last, quick and fun to drive – PR exposure worth a fortune. 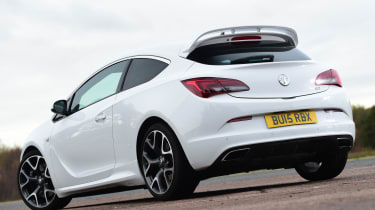 The fast Astra story has been brought right up to date with the VXR – the fastest roadgoing version ever. It’s based on the GTC Coupé, but has had a total overhaul. It was developed at the Nürburgring, and engineers have added clever HiPerStrut front suspension, a limited-slip diff and Watts link semi-independent rear suspension.

We awarded the VXR a full five-star rating on our first drive in 2012, explaining: “It’s incredibly fast, but its sophisticated chassis finally makes all that power usable. If you want a head-turning hot hatch that promises real driving thrills, this is it.”

What was your favourite hot Astra? Leave us a comment!