Verdict on the new turbocharged Vauxhall Astra VXR, which delivers on its bold looks with huge pace and sharp handling 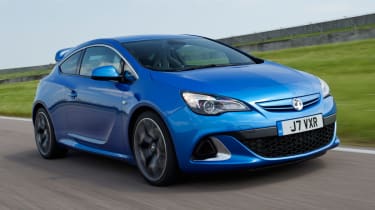 The previous-generation Astra VXR had the pace to outpunch its rivals, but never offered the precise handling it needed to be a winner. This all-new version does. It’s incredibly fast – the fastest in its class – but its sophisticated chassis finally makes all that power usable. Yes, the ride is firm and the price very high, but if you want a head-turning hot hatch that promises real driving thrills, this is it.

Advertisement - Article continues below
The performance hatchback arena has never been more tightly packed or hotly contested. The all-new Ford Focus ST, as well as the updated Renaultsport Megane 265 and Volkswagen Golf GTI Edition 35, are all aiming to be at the top.
However, Vauxhall’s latest contender – the new Astra VXR – is definitely the most promising: it has more power, more torque and more performance-boosting technology than all of its rivals.
Using the curvy three-door Astra GTC as its base, the VXR looks set to turn the most heads, too. A colour-coded front grille, more aggressive front spoiler, LED tail-lights and 19-inch alloy wheels are all standard.
Our car was also fitted with the £995 VXR Aero Pack – an option Vauxhall reckons 85 per cent of customers will specify. The pack includes attention-seeking 20-inch alloys, a biplane rear spoiler and muscular side skirts.
Advertisement
Advertisement - Article continues below

With 276bhp from its 2.0-litre turbocharged engine, the Astra VXR has the go to match its considerable show. It covers 0-62mph in 5.9 seconds – and if you’re in any doubt about how fast that is, just consider that a Porsche Boxster completes the same sprint in 5.8 seconds. This is also six tenths of a second quicker than the Focus ST can manage, seven tenths up on a GTI Edition 35 and a tenth faster than the Megane 265.
Advertisement - Article continues below
Those figures only tell half the story. This is a car full of character. Not only is there searing pace throughout the rev range, but the VXR also produces an exhaust note that sounds like nothing else on the road. From inside the cabin, there’s a growl up until about 4,000rpm, when it develops into something more like the rough whoosh of a jet engine. All that performance is more accessible than ever thanks to a clever front suspension set-up borrowed from the Insignia VXR.
The HiPerStrut system helps reduce the amount of torque steer – the sensation that the steering wheel is tugging in your hands as you accelerate – and it works very well. Under most conditions, you can floor the throttle out of a bend and feel totally in control. It’s only when you find some camber that the wheel can sometimes wriggle a bit. But this just adds to the sense that this car is a bit of a hooligan.
Advertisement - Article continues below
Advertisement
Advertisement - Article continues below
Steering which feels alive is something that has become harder to come by as new cars switch to less talkative electric power-steering systems, but the VXR’s electro-hydraulic set-up helps buck the trend. Turn into a corner and, as you hit a bump, the wheel will feed back exactly what’s underneath the front tyres to your hands. It gives you huge amounts of confidence.
And that’s a good thing considering how capable this car is in corners. A lot like the Megane 265, you have to be travelling at really high speeds before the Astra VXR even begins to feel flustered on a twisting, poorly surfaced UK B-road.
The car comes as standard with a limited-slip differential, which helps draw you into the apex of a bend and slingshot you out the other side. The front wheels will eventually lose grip, but switch the Astra’s adaptive dampers to Sport, or even VXR mode, and they seem to grip even harder than before.
Advertisement - Article continues below
So is it all good news? Not quite. The problem is the ride. It’s firm – but not necessarily uncomfortable – in the standard setting, but it becomes even stiffer when you start to explore the Sport and VXR settings. As a result, these are best used occasionally on smooth roads, rather than as standard.
Advertisement
Advertisement - Article continues below
Still, for all its immense performance, the Astra VXR doesn’t do too badly at the pumps. Combined economy is 34.9mpg, and the car emits a reasonable 189g/km of CO2.
So the blow to your wallet won’t be from your road tax bill or even at the filling station; instead, it will come at the dealership. Vauxhall has set the starting price of the VXR at £26,995, and once you add the Aero Pack and VXR Performance Seat Pack fitted to our car, that rises to £28,485.
Almost £30,000 for an Astra will certainly cause some people to think twice, but then a VW Scirocco R – perhaps the most similar car in performance – costs £30,745. That said, one of the most capable vehicles in this class is the Mégane Cup 265. It’s not as well equipped, admittedly, but it costs only £24,840. A Focus ST looks a relative bargain at £21,995.
So if anything stops Vauxhall from selling the 1,200 Astra VXRs every year that it’s hoping to, it will be the price, because there’s certainly nothing wrong with the way it looks or the way it drives.
Viewed simply in those terms, this is the best VXR model that Vauxhall has ever produced – and a genuine contender for a place at the top of this class.
Advertisement
Share this on TwitterShare this on FacebookEmail
Advertisement