When it comes to selling super­minis, it all comes down to the three Ps 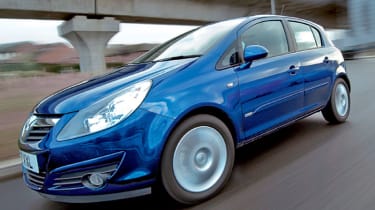 Lacklustre performance and a poor ride let down the 1.4-litre SXi Corsa in our recent group test. But it only narrowly missed out on class honours, offering excellent design, top build quality and fine practicality. Now, the 1.7 diesel, five-door style and softer suspension put this version up with the class leaders. An accomplished supermini, most families would need nothing else – although the price might make the 1.3 CDTI a more tempting choice.

Nothing’s more important than price, practicality and performance. But with that in mind, how does the new 1.7-litre Vauxhall Corsa CDTI measure up?

There’s no doubt that our five-door Design test model looks the part. Yet the generously equipped flagship costs a breathtaking £13,795, which is a lot for a supermini, regardless of trim.

However, under the bonnet lies the fuel-sipping 1.7 CDTI diesel engine. It’s capable of returning nearly 59mpg which, as regular long-distance drivers will find, helps to offset the asking price. Standard air-conditioning and clever touches such as adaptive headlamps add to the appeal. First impressions are further improved by the styling. The design is clearly influenced by the bigger Astra, even down to the distinctive kink in the C-pillar.

The five-door shell is very tall, while the steeply raked screen and snub nose add a mini-MPV look. Build quality on our test model was very good, with tight panel gaps and a reassuringly solid feeling to every door slam.

The people carrier theme continues inside, where there’s plenty of headroom. A large windscreen provides a good view of the road ahead, but overall visibility is spoiled by thick A-pillars and the limited rear view. At worst, judging tight parking spaces can be tricky – not great for a car aimed at the urban cut and thrust.

On the whole, though, the cabin is still a good place to spend time, providing enough space for four adults to sit in reasonable comfort. The cosseting front passenger seats offer a wide range of adjustment, and only a slight lack of rear legroom stops the Corsa from setting new standards for the class.

Cabin quality is excellent and feels tough enough to withstand family use, while the translucent controls and restrained trim on the console are neat touches. The generous interior cubby space and a 285-litre split-level boot easily swallow everyday clobber, too.

Under the bonnet, the 125bhp turbo­-charged engine is the most powerful unit offered so far in a Corsa. And at 59mpg, it also has one of the best fuel economy figures, bettered in the range only by the 61mpg 1.3-litre CDTI.

Refinement is a strong suit and, unlike some other Corsa variants, the 1.7 is competent in town as well as on the open road. On the motorway, its long-striding sixth gear, decent urge and minimal road and wind noise make long journeys easy. The Design rides very well, too, cushioning occupants from the worst of the impacts common on urban roads.

The handling on the softer springs and dampers is failsafe, and stability is excellent. Only the numb steering disappoints and even then, while not as sharp as some rivals, it’s leagues ahead of its predecessor’s.

So there’s no doubt that the 1.7 CDTI is set to be a real winner, combining quality, practicality, safety – five-star Euro NCAP results are expected – and performance with decent running costs. Yet this engine is available in the racy SXi or the luxurious Design only. And although you get plenty of kit for your money, nearly £14,000 is a lot to pay for a small family car.