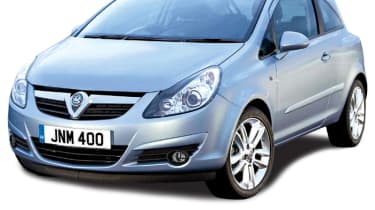 Although the Corsa's growing size is a reflection of British drivers' changing tastes, there's no doubt that the model remains a very valuable member of the supermini class. Its engine offers an impressive blend of economy and performance, while there are plenty of clever optional extras - as demonstrated by the car's integral bike rack. In addition, the model exhibits grown-up road manners that give the Corsa the refinement and poise of motors in the class above.

They are bigger, heavier and more expensive than ever... No wonder it's becoming so easy to criticise superminis for losing sight of their roots!

And with even 'compact' models such as this new Corsa measuring four metres in length, small doesn't come into it. Lined up against its forebears like the original 1993 Corsa, the newcomer is a giant!

It may be true that the supermini's traditional values of well packaged design and small proportions are being eroded by drivers' desire for ever more refinement, practicality and versatility. However, the new Corsa proves that they are getting a pretty good deal out of the change as well - as this 75bhp evolution of the fresh 1.3-litre CDTI clearly shows.

The entry-level diesel returns more than 60mpg, yet in Club trim it offers more luxury, space and comfort than some family cars in the class above. Innovative extras include a bike rack that slides out of the rear bumper, while there's also a CD player and air-conditioning as standard.

On the road, supple suspension makes for a relaxing ride, and the willing diesel proves responsive and torquey. Although the 13.6-second 0-60mph sprint is slow, in-gear perfor-mance doesn't feel sluggish and the car is a capable long-distance cruiser.

In fact, there's little to criticise - and although we've been less enthusiastic about some of the petrol Cor-sas in the range before, this diesel proves why the car is a top UK seller. It might be big, but it's brilliant, too!