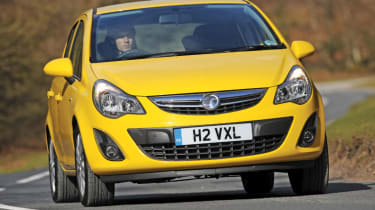 The raft of engineering changes introduced last year made the Corsa a much better car to drive. And this visual update ensures it’s now better to look at, too. It certainly deserves sales success. Our major gripe is that the changes aren’t as radical as they could be – in profile and from the rear, you would be hard-pushed to mark this out as an updated model. The cabin could do with a more modern design, too. However, this is still a highly recommended buy.

Top brass at Vauxhall are keeping an ‘eagle eye’ on the sales chart! Based on last year’s figures, the Corsa is the UK’s second most popular small car behind the Ford Fiesta. So with that in mind, the Luton firm has given its baby an all-new look, which includes the oversized eagle-eye headlights.

The redesign also incorporates a fresh grille – a classy chrome two-bar unit with a lower air intake. This is complemented by five bright new paint colours such as Chilli Orange and Sunny Melon (pictured), as well as new alloy wheel options. SE and SXi come with new 16-inch rims, while the top-spec VXR now has 18-inch alloys inspired by the Insignia VXR’s 20-inch designs.

There have been no changes under the skin, but then the Corsa benefited from a number of subtle engineering tweaks only last year. These included revised software for the power-steering, softer front springs and uprated anti-roll bars. As a result, it rides well and soaks up bumps in the road, although it could prove to be slightly too firm over long journeys.

Through bends, the stiff set-up limits body roll and allows the Corsa to change direction eagerly. If only the steering wasn’t so light and uncommunicative; it doesn’t help driver involvement. Vauxhall claims the best-selling variant will be this 84bhp 1.2-litre petrol model. Although it’s not particularly quick – covering 0-60mph in 12.7 seconds – it is hushed on the move and fuel efficient, too.

However, its lack of power can be felt up hills, and it struggles at motorway speeds. Fitted with the slick-shifting five-speed manual gearbox, this Corsa produces 124g/km and claims 53.3mpg combined fuel economy. That makes it exempt from the first year of road tax; from then on, owners will face an annual bill of £90.

Opt for the automated manual Easytronic gearbox, though, and CO2 emissions drop to 119g/km, slashing the price of a year’s disc to £30. Fuel returns are also improved, at 55.4mpg. Buyers looking for the ultimate in efficiency can go for the 94bhp 1.3-litre CDTI ecoFLEX model fitted with stop-start. This car puts out a mere 94g/km and claims 78.5mpg combined.

The best-selling trim level will be SXi, which includes air-con, cruise control and tinted windows. Our slightly cheaper Excite model does without all this, but settles instead for crucial equipment such as Bluetooth and air-con. The car is reasonably practical, with space in the back for two adults and a 285-litre boot. Folding the rear seats down liberates 1,100 litres of space.

At £12,795, the Corsa Excite costs around £100 less than a similarly specified Fiesta – and with the redesign the two models are closer than ever on style. However, the blue oval’s baby is still the better choice, and we expect the sales charts to continue to reflect this.

Rival: Fiesta 1.25 Zetec The Ford only just loses out on price, but it offers a much more solid and stylish interior. On the road, it’s still the pick for keen drivers due to its sharp handling and agile chassis.