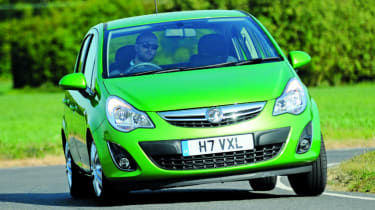 The greenest Corsa yet is an appealing package, and with its improvements in economy and emissions, plus the sleek styling updates, it’s likely to stay high up the sales charts. As with many sub-100g/km models, though, the ecoFlex demands too many sacrifices in dynamics for the sake of economy. The facelift is also rather skin-deep – the tired interior is left untouched, so the Vauxhall trails some way behind the class-leading Fiesta ECOnetic.

The special-edition VXR is Vauxhall’s new track star, but at the other end of the Corsa spectrum is the most efficient version yet of the popular supermini. And Auto Express has driven that, too!

The 1.3-litre CDTI ecoFLEX gets the same visual tweaks as the rest of the revised line-up, with swept ‘eagle-eye’ lights and a prominent chrome grille to keep it looking sharp.

It’s powered by a modified version of the firm’s 94bhp 1.3-litre diesel, and features stop-start. The unit is mated to an uprated five-speed manual gearbox, with taller ratios, and when you add low-restistance tyres, it slashes CO2 emissions to 95g/km. The newcomer also promises 78.5mpg economy.

On the move, the stop-start system works well. Hit the ‘eco’ button, and the set-up cuts the engine once you lift your foot off the clutch pedal, although if you leave power-sapping electronics such as the air-con and sat-nav on, the diesel will restart.

The gearbox shifts smoothly, with a pleasing, positive action, but it will see plenty of use – because at anything below 2,000rpm, the Corsa feels very reluctant to make any forward progress. Adding to the problem is the gruffness of the CDTI engine. It clatters on start-up and becomes strained at motorway speeds.

The steering is direct and well weighted, if a little numb, and the compact body remains well controlled through corners. But the trouble is, the chassis fails to communicate with the driver in the same way as class rivals such as the Ford Fiesta, and doesn’t deliver the refined comfort of VW’s newly grown-up Polo, either. The Corsa is certainly practical, though, and in this five-door guise, it offers the kind of rear head and legroom you’d expect to find on a much bigger hatch. Plus, the 285-litre boot is big enough to carry large bags.

Things start to unravel in the passenger compartment, though. While the dashboard plastics used are sturdy, the drab design and ageing layout is at odds with the smart new exterior styling.

Our model also came with the £750 Touch & Connect pack, which includes built-in sat-nav, Bluetooth connectivity and steering wheel-mounted audio controls. But this pushes the price close to £17,000.

Rival: Polo BlueMotion The VW costs £15,480 in super-efficient 74bhp 1.2-litre BlueMotion trim. It returns 80.7mpg combined and emits 91g/km of CO2, has a better spec and is more comfortable to drive.