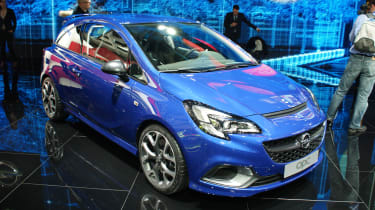 The all-new fourth-generation Corsa was revealed last year, and now the range-topping Vauxhall Corsa VXR has appeared at the Geneva Motor Show - adding some performance to the supermini's line-up.

The headline news is that the Peugeot 208 GTi and Ford Fiesta ST rival is faster and more powerful than its predecessor - and both of its rivals.

As before, the VXR will only be made available as a three-door, but comes suitably spruced up with arch-filling 17-inch alloys, beefed-up bumpers and hip-hugging racing seats. At the rear, the centrally mounted exhaust from the previous model has been ditched in favour of twin tailpipes. 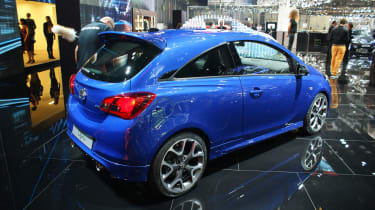 Beneath the bonnet, Vauxhall has fitted a retuned version of the 1.6-litre four-cylinder turbo from the outgoing model. It boasts 202bhp and 245Nm of torque, making it more powerful than its closest rivals and also quicker than the Fiesta ST with a 0-62mph sprint time of 6.8 seconds and a top speed of 143mph.

The bulk of that power is available lower down in the rev range, too, at 1,900rpm rather than 2,250rpm in the old model. An overboost function also provides an additional 35Nm of torque for some extra overtaking ability. Efficiency takes a slight hit as a result, though, with 37.7mpg and 174g/km of CO2 claimed – considerably worse than its greener rivals’ figures.

However, performance is the order of the day with the VXR, as Vauxhall has also bolted on some specially tuned Koni dampers which feature Frequency Selective Damping (FSD). This helps control body movement and smooth out the ride, with a 10mm drop in height also minimising body roll in corners. 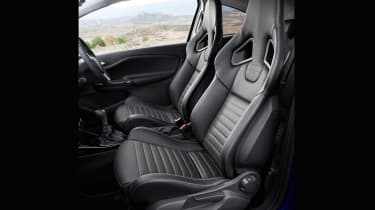 For the first time, Vauxhall is also fitting the Corsa VXR with a two-stage electronic stability programme. Select Competition Mode, and it turns off the traction control and relaxes the ESP, while all safety nets can be completely deactivated for track use.

Customers who want to up the ante can also opt for Vauxhall’s Performance Pack, which includes certain features previously seen on outgoing Nürburgring and Clubsport Corsas. Larger Brembo brakes, 18-inch alloy wheels, firmer suspension and a front limited-slip differential are all part of the add-on.

Pricing is yet to be announced ahead of the new car’s arrival in UK showrooms in May, but a figure of less than £20,000 is expected to keep it competitive with its rivals.