The Vauxhall Corsa VXR is an entertaining and impressive little pocket rocket, but it falls short of the class leaders 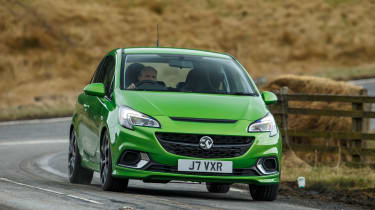 The new Vauxhall Corsa arrived on our roads in late 2014, but it was another few months before we tried the fire-breathing VXR version. Now in its second generation, the 2015 Vauxhall Corsa VXR is a 202bhp hot hatch designed to rival cars like the Ford Fiesta ST, Peugeot 208 GTi and Renaultsport Clio RS.

Based on the ever-popular Vauxhall Corsa supermini, the VXR engineers have added a turbocharged 1.6-litre petrol engine, uprated suspension, and a beefed-up body kit to make this model stand out from the crowd. Inside all cars get the intuitive Intellilink touchscreen infotainment system, a pair of body-hugging bucket seats and a flat bottomed leather steering wheel.

While prices start a smidge above the Fiesta ST, Vauxhall says it undercuts the Ford spec for spec by several hundred pounds – and with it being a Vauxhall, potential customers should be able to negotiate somewhat on the price. Available from £17,995 in three-door guise only, you can get a Performance Pack model for £20,395.

Rather than a car designed to get people from A to B, the VXR is a souped-up small car, capable of 0-62mph in 6.5 seconds, and a top speed of 143mph. That means – on paper at least – it has its rivals beaten hands down.

Running costs are another matter, however. Managing just 37.7mpg on the combined cycle, the Corsa VXR falls some 10mpg short of the Fiesta’s quoted 47.9mpg. It’ll cost you more to tax, too, thanks to higher CO2 emissions.

However, that’s not what a hot hatch is about. The Corsa VXR offers all the same practicality boons as its lesser-powered stablemates, and if you stick to the smaller 17-inch alloy wheels, should be genuinely usable every day.

Vauxhall has worked hard on the new Corsa VXR – clearly aware that competition is now hotter than ever. It gets the same 202bhp 1.6-litre turbocharged engine from the last-generation Corsa VXR Clubsport edition, meaning 0-62mph is covered in just 6.5 seconds. That’s almost half a second faster than the Ford Fiesta ST, and 0.2 seconds quicker than the automatic-only Clio RS. Top speed for the Corsa is 143mph.

It’s sharp to drive too, with plenty of grip from the sticky low profile tyres. We’ve only driven it on the larger 18-inch wheels – which make for quite a harsh and unforgiving ride – but the standard-fit 17s are likely to be easier to live with day to day. 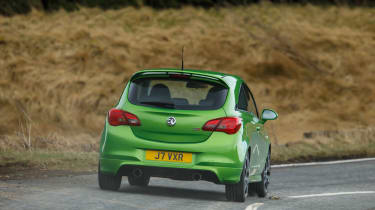 Buyers can also spec a £2,400 Performance Pack – and Vauxhall reckons as many as 40 to 50 per cent of cars will leave the factory with this box ticked. It adds a Drexler limited slip differential, Brembo brakes, a retuned suspension setup and those bigger alloy wheels.

In our opinion it transforms the way the hot hatch drives, making it even easier to drive quickly – and thanks to the brilliantly sticky diff, the Corsa VXR can pull you out of corners at alarming speeds. The brakes have a more progressive, linear feel, too, giving more confidence on a spirited cross-country dash.

Like many fast hatchbacks, the Corsa VXR is based on a £10,000 supermini. While this means it is as easy to drive around town as the standard car, the bigger wheels and firmer suspension do make it crash and bump over ruts in the road. It certainly isn’t the most comfortable car in its class – despite the body-hugging Recaro sports seats. If a forgiving ride is key, try the Peugeot 208 GTI.

Unfortunately, in some areas where the standard Corsa excels, the VXR falls down. Running costs is probably the VXR’s biggest chink in an otherwise impressive amour – managing just 37.7mpg on the combined cycle. While that may not sound too bad, after 150 fast miles around Scotland, our trip computer was reading closer to 24mpg, which simply isn’t good enough in this class.

After spending six months in a Fiesta ST, we were averaging more than 30mpg. That may be someway short of the manufacturer’s official claims, but it’s considerably better than what we saw form the Corsa. The VXR will cost more to tax, too, given the relatively high 174g/km CO2 emissions. That puts it in VED band H, for annual road tax of £205.

However, servicing and parts shouldn’t be too expensive, and being a Vauxhall, there are plenty of dealers dotted around the country should anything go wrong.

If you’re after a souped-up supermini that makes an impact, look no further than the Corsa. Like other models in the line-up, the VXR has been treated to a facelift that includes a new, wider grille, reprofiled headlamps (bi-xenons on the VXR), larger tail-lights and subtly tweaked side windows. These changes help keep the Corsa looking fresh, but it’s the hot hatch’s racy bodykit that attracts the most attention.

At the front is an aggressive-looking bonnet vent and a deeper front bumper, plus chunky side skirts, a prominent tailgate spoiler and large diameter twin exhausts. Our Performance Pack car also benefited from eye-catching 18-inch alloys wrapped in ultra-low-profile tyres. Overall, the Corsa isn’t as well resolved as, say, the Fiesta ST, but it turns heads. 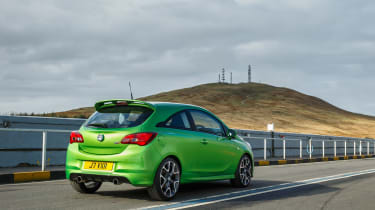 The sporty theme continues inside, where the car combines the latest updates with numerous racy touches. The new dashboard has a classy look and feel, but it’s further enhanced by the addition of bespoke VXR dials, a flat-bottomed three-spoke steering wheel with perforated leather rim and a chunky, square-edged gearlever, which looks distinctive but is uncomfortable to hold. Other new features include the supremely supportive, high-backed Recaro seats and sporty alloy pedals.

Elsewhere, it’s standard Corsa, which means you benefit from good-quality materials and a logical layout. It’s not as upmarket as the MINI’s cabin, but it has the edge over the slightly dated Fiesta’s. The Vauxhall also gets a decent amount of kit, with air-conditioning, a DAB radio, heated windscreen and cruise control all fitted as standard.

The standard Corsa is one of the most spacious models in the supermini class, so it’s no surprise to find the VXR delivers decent practicality.

Access to the rear seats is a little awkward, but once you’ve clambered past the bulky Recaro front seats, you’ll discover a decent amount of head and legroom. 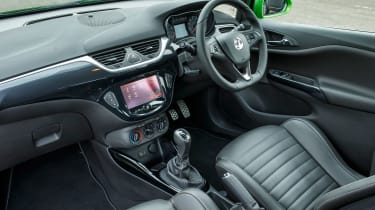 Opening the tailgate reveals a well shaped 285-litre boot, which can be extended to 1,090 litres with the 60:40 split rear bench folded flat.

The current Corsa is too new to have featured in our Driver Power 2015 satisfaction survey, but its mechanically similar predecessor finished in a lowly 175th place.

Vauxhall has addressed many of the old model’s weaknesses, so you can expect a stronger performance next year – although if your car does suffer from any issues, you’re unlikely to receive top-notch service from your local dealer, as the brand’s network placed 20th in our 2014 poll.

The latest Corsa hasn’t been assessed by Euro NCAP, but the old car was awarded four stars. It’s likely the new model will improve on this score, as it comes with more safety kit. 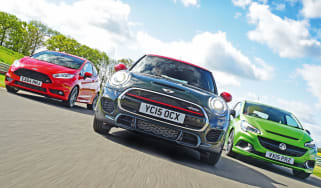 228bhp MINI JCW has raised the temperature in the hot hatch market, but can it see off Vauxhall and Ford rivals?
New Vauxhall Corsa VXR 2015 review 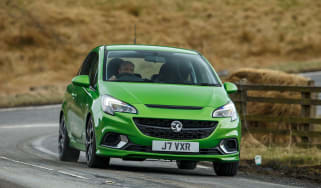 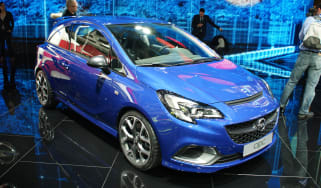 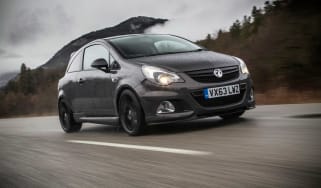