228bhp MINI JCW has raised the temperature in the hot hatch market, but can it see off Vauxhall and Ford rivals? 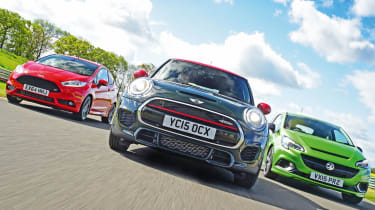 The fierce battle for hot hatch honours is reaching boiling point. In an effort to hold high-performance bragging rights and secure more sales, manufacturers are turning up the wick on their hottest pocket rockets.

One of the most eagerly anticipated arrivals is the MINI John Cooper Works, which is the most powerful model yet from the British brand. Based on our reigning Car of the Year, the racy newcomer packs a 228bhp 2.0-litre turbo engine, uprated suspension and more muscular looks. 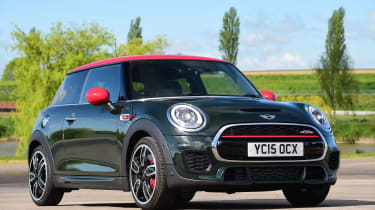 With prices from £23,050, it isn’t cheap, but the JCW promises scorching acceleration, sparkling driving dynamics and upmarket appeal.

However, it’s not the only souped-up supermini making its debut. The Vauxhall Corsa VXR has finally been treated to the same mid-life facelift as the standard car, but there’s more to this refresh than a cosmetic nip and tuck. 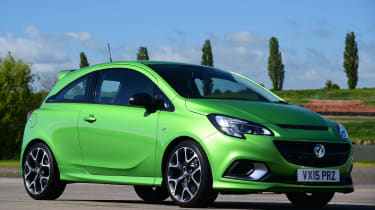 Featuring more power than before, plus the option of a Performance Pack upgrade, the £20,395 car looks to have pace and price on its side.

Setting the benchmark for our pair of newcomers is the Ford Fiesta ST. It features the brand’s Mountune engine upgrade, and looks tough to beat with its power, poise and price tag. The heat is on... 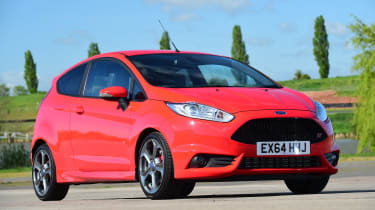 Click the links above for individual reviews, and scroll down to see which hot hatch comes up trumps... 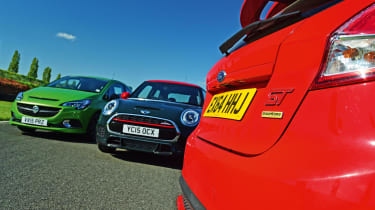 John Cooper Works logo is a nod to the famous Formula One race team that started tuning the original Mini in the early sixties. The Mountune name dates back to 1980, but didn’t begin its association with Ford until the late eighties. Meanwhile, the VXR can trace its roots to Vauxhall’s VX Racing British Touring Car Championship squad of 2003. 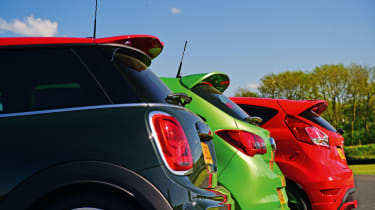 The Fiesta and Corsa are given muscular makeovers courtesy of their racy bodykits, larger wheels and lowered suspension. However, the MINI goes one stage further. You can have contrasting roof and door mirror covers, distinctive body decals and several alloy wheel options. 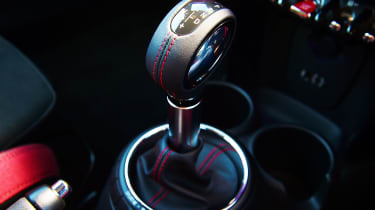 All three of our cars get a six-speed manual box as standard, but only the MINI is available with an auto transmission. The six-speed Steptronic system promises quicker acceleration, plus it’s linked to the sat-nav, so can anticipate gearchanges. 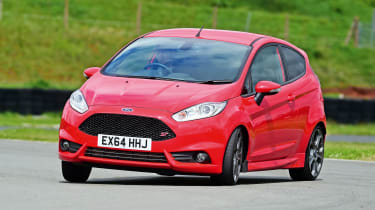 The Fiesta ST has landed yet another knockout blow to the competition. With its brilliant combination of razor-sharp handling, muscular performance and unrivalled value, the fast Ford sets the bar high in the hot hatch market. Few cars at any price are as rewarding to drive, while the racy looks and generous kit list further boost its appeal. A firm ride is a small price to pay for such excellence. 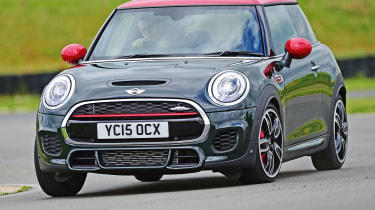 MINI’s JCW is more powerful and upmarket than ever, plus it now boasts new levels of refinement. And while some of its predecessor’s raw charm is missing, the brand new model is fast and engaging to drive. A cramped cabin and high purchase price count against it, but the MINI still manages to effortlessly combine desirability and driving fun. 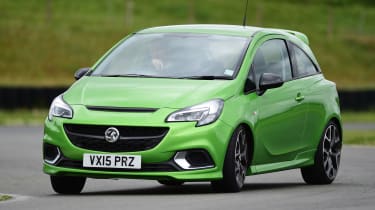 When it comes to bold looks and on-paper potential, the racy Vauxhall Corsa VXR takes some beating. However, the case for the hot hatch unravels once you’re on the move. Sure, it’s a very fast car, but it just lacks the finesse and feedback that mark out the best pocket rockets on the market, while the stiff ride compromises the Corsa’s abilities as a daily driver. 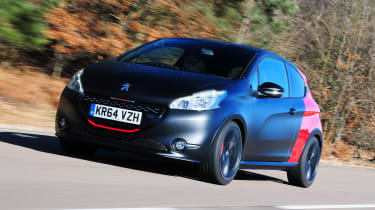 Hardcore version of capable 208 GTi boasts more power, stiffer suspension and limited-slip diff for a thrilling driving experience. It’s not quite as engaging as the Ford and it’s expensive to buy, but the 30th edition is a return to form for Peugeot. 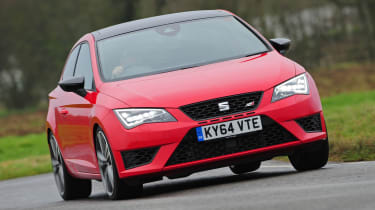 Our hot hatch champ is now a second-hand bargain. For less than the cost of a MINI JCW, you could get a 2014 SEAT Leon Cupra 280 DSG with under 7,000 miles. Agile handling and blistering performance are matched by great looks and practicality.