New VW Polo GTI aims to finally step out of hot Golf’s shadow. But can it see off pocket rocket rivals from Peugeot and MINI? 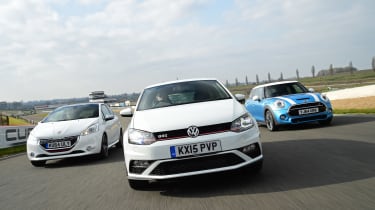 Volkswagen invented the hot hatch with its Golf GTI back in the seventies, and while the smaller Polo has worn the GTI badge over the years, the supermini has always struggled to emerge from the shadow of its illustrious sibling.

The new Polo GTI is aiming to change that, but it faces a tough task to make an impact in the cut-throat hot supermini class. It’s been given the firepower to do exactly that with its 189bhp 1.8-litre TSI turbo petrol engine, and there are plenty of GTI styling cues on show to boot. However, for this first test, it’ll have to see off two front-runners in the class.

The MINI Cooper S is huge fun to drive and has plenty of style of its own, while the addition of a five-door model has boosted its versatility. And then there’s the Peugeot 208 GTi. It’s a real return to form for the French brand, with a great mix of handling fun and refined manners. Does the Polo GTI have what it takes to come out on top?

Both the Polo GTI and MINI Cooper S nod to their heritage when it comes to styling. The VW’s red pinstripes and GTI badge on the grille hark back to the original Golf GTI, as does the tartan cloth trim inside.

MINI’s retro styling has been a constant through every generation, while the latest car features a fake bonnet scoop and the centrally mounted twin exhausts seen on previous Cooper S models. 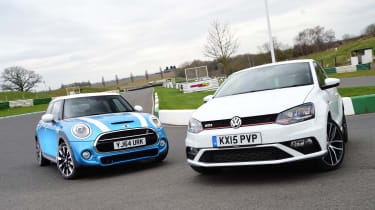 All three cars are fast, but the MINI is made even better by adding the £135 optional Driving Modes function. Twist the ring mounted around the base of the gearlever to Sport mode, and the LED lights around the main instrument cluster turn red, while steering and throttle response are enhanced.

The 208 GTi is only offered as a three-door, but the Polo and MINI come with three or five doors. The five-door Polo costs £630 extra, while you can save £600 on our Cooper S test car by going for the three-door. These two are offered with auto boxes, too, for £1,245 and £1,495 extra respectively. 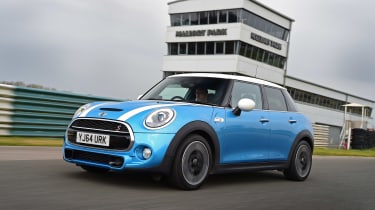 If you want a fast supermini that will put a smile on your face every time, the MINI Cooper S has a fun factor that puts it ahead of its rivals here. The five-door version adds some versatility, but the three-door is just as entertaining, while both deliver efficiency that belies their performance. Just be carefulwith the options, as they can easily rack up the price on the forecourt. 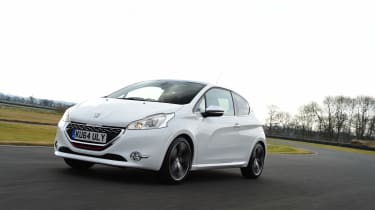 The 208 GTi has an advantage over the Polo GTI simply because it’s a more entertaining car to drive. It’s sharper in corners and has a punchy power delivery, yet it can match the VW for comfort and refinement when you’re taking it easy, and it’s reasonably economical, too. It’s marginally more expensive than the Polo, but it features a lot more standard kit. 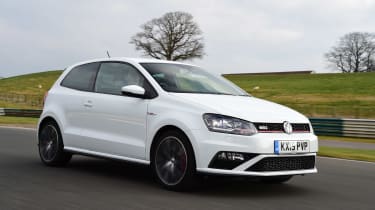 While we’re fans of the standard Polo, the GTI model fails to make an impact at the top of the hot hatch tree. Yes it’s quick, and it’s built to the same high standard as the rest of the range. But it lacks the kind of involvement that makes the Cooper S or 208 GTi such fun to drive. On top of that, the Polo isn’t quite as efficient and is lacking in standard kit, so it comes third here. 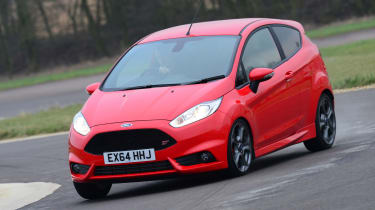 We’ve said it before and we’ll say it again, if you don’t want five doors or an auto box, there’s no better hot supermini than the Fiesta ST. Its sharp chassis and punchy engine will put a smile on your face, and the well specced ST-3 costs £19,395.