Vauxhall’s new hope squares up to its VW arch-rival 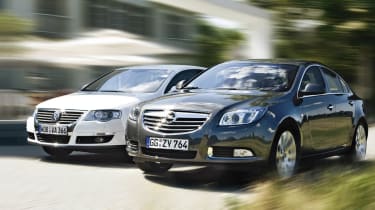 We have only driven pre-production Insignias so far, but the signs have certainly been extremely positive. Our five-star rating in Issue 1,025 came courtesy of the new Vauxhall’s supple ride, sporty handling and positive steering. The Passat rides well, yet even at this early stage it’s the Insignia which has the dynamic edge. Add superb quality, and Volkswagen may no longer have the bridge between mainstream and premium all to itself.

It’s the head-to-head of the year! In Issue 1,025, we tried Vauxhall’s new Insignia on the road for the first time. But how does it fare against a major rival: the Volkswagen Passat?

So we’ve put these claims to the test in an exclusive comparison – pitting the new model against a competitor synonymous with technical precision. VW’s family saloon has long been seen as the car which bridges the gap between the Ford Mondeo and compact execs such as BMW’s 3-Series. So how does it shape up alongside the Insignia, seen here wearing Opel badging?

Let’s start with the design. You can make your own mind up ultimately, but the Insignia’s sleek lines, purposeful stance and neat details leave the Passat’s three-box silhouette looking dull in our eyes.

Some people may appreciate the simplicity of the German car, yet there’s no doubt the Vauxhall is well conceived. The Insignia is big – it’s 22cm longer than the Vectra – but this bulk is well hidden.

Smart details such as the dynamic ‘blade’ creases, which run across the bottom of the doors and up towards the wing mirrors, are welcome. And they make the Passat appear a bit slab-sided.

Inside, there’s a stark contrast between the approach of the two saloons. The Passat has a feeling of quality and solidity previously unmatched by anything this side of the premium brands. But next to the Insignia’s sweeping, high-set layout, it looks a little flat. What’s more, the new Vauxhall is at least on par in terms of quality.

Equipment is generous in the Insignia. Even base cars get an electrically adjustable driver’s seat, climate control, cruise control and daytime running lights – all things a basic Passat does without. But the VW has alloys as standard; Vauxhall will charge you £400.

So, although an entry-level Passat 1.4-litre TSI costs £75 more to buy than a base 1.8-litre Exclusiv Insignia, the longer standard kit tally makes the Luton model the marginally cheaper choice like-for-like. As its engine delivers 138bhp to the front wheels, the Vauxhall has an 18bhp power advantage too.

There are further benefits for buyers of mid-spec Insignias. Even though the 2.0-litre diesel promises the same 48.7mpg economy as the 2.0 TDI Passat – and has virtually identical emissions – the Vauxhall again provides 18bhp more power. And it costs £1,005 less, too.

Insignia buyers also get greater practicality. The saloon has 15 litres more boot space, while there’s the option of a five-door hatchback bodystyle. Legroom in the rear is generous, although the Vauxhall’s sloping roofline encroaches on head space for tall people in the back.

As we have already found out, the Insignia drives very well indeed – and it promises to outclass the Passat in every way. We’ll give our definitive verdict in a full test later this year.