Vauxhall aims to win over diesel buyers with its new, efficient petrol turbo 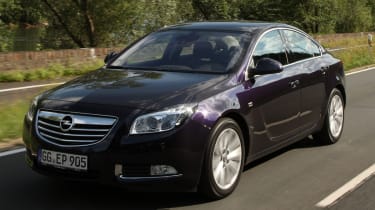 While this engine is unlikely to convert the majority of Insignia buyers from diesel power, it’s a well rounded and refined alternative, and much better than the 1.8-litre unit it replaces. The economy and efficiency gains achieved by the rest of the changes are significant, but our biggest gripe is with the price – a  similarly equipped Mondeo 1.6 EcoBoost Titanium costs a substantial £1,935 less.

Petrol or diesel? If you’re a company car driver choosing a large family model, it’s usually derv all the way. But Vauxhall’s latest, revised Insignia is seeking to offer an alternative with a fresh 1.4-litre turbocharged unleaded engine.
Can the newcomer, seen here in Opel guise, offer a decent blend of economy and pace? The unit replaces the old, normally aspirated, 1.8-litre and is a direct rival for the 1.6 EcoBoost turbo in Ford’s Mondeo.
Video: watch CarBuyer's video review of the Vauxhall Insignia
[[{"type":"media","view_mode":"content_narrow","fid":"68338","attributes":{"alt":"","class":"media-image"}}]]
The car features a raft of updates such as automatic stop-start, an enclosed undertray to improve aerodynamics and lower-rolling-resistance tyres.
The result is 25 per cent better economy than the old 1.8-litre engine, at an impressive 49.6mpg, while CO2 emissions are reduced by the same proportion, dropping to a mere 134g/km. By comparison, the Mondeo EcoBoost claims 44.1mpg and 149g/km.

The 1.4-litre turbo is good for 138bhp and 200Nm of torque, and drives the front wheels through a six-speed manual box. And while the car isn’t as quick as the more powerful 158bhp Mondeo, it’s hushed and refined, even at high speeds.
Considering the engine’s small capacity, in-gear urgency is also very impressive. You are rarely left wanting for pace, although the motor is at its best when
you use the low-down muscle, as it starts to feel strained much beyond 4,000rpm.
The Insignia’s new electronic power-steering rack is linear and well weighted, and the skinny tyres still generate a considerable amount of grip. Nevertheless,
on twisty roads, the drive is capable rather than engaging.
The ride is generally quite comfortable and the Vauxhall is an excellent cruiser, with wind and road noise equally well suppressed. For now, visual enhancements are limited to a pair of new 18-inch alloy wheel designs, and a fresh colour – Luxor Blue – a more thorough overhaul is due next summer.
Apart from updates to the optional sat-nav, the interior remains pretty much unchanged, too, but that’s no bad thing. It is still a high-quality mix of soft-touch plastics and plenty of equipment, and our SRi-trimmed model came well specified.
Overall, the newcomer is a welcome addition to the range. However, the diesels are likely to remain the strongest sellers.
Share this on TwitterShare this on FacebookEmail