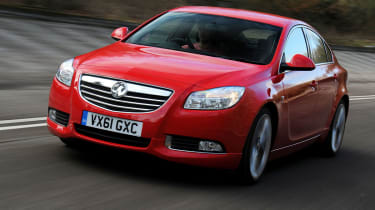 If you want to stand out in an Insignia, the VX-Line is for you. The sporty bodykit brings some of the aggression from the flagship VXR version to lesser models in the range. Factor in standard sat-nav and you might think you’re on to a winner. However, at almost £26,000, it’s too expensive.

Vauxhall has made its new VX-Line trim available on the Insignia. It adds 20-inch alloy wheels and a more aggressive bodykit to SRi trim and gives low-powered Insignias, such as this 138bhp 1.4-litre turbo petrol model, the look of the high-performance VXR version.
In addition, you can specify your VX-Line model in ‘Red Nav’ form, which adds Power Red paintwork and sat-nav. Standard equipment is generous, with comfortable sports seats, a USB input for music players, a leather-covered sports steering wheel and cruise control. You also get Bluetooth.
So this Insignia has plenty of showroom appeal, but what’s it like to drive? Well, the 138bhp petrol engine is perky, propelling the car from 0-62mph in 10.1 seconds and on to a top speed of 127mph. It’s quiet and refined, and at motorway speeds you barely notice it. The small turbo is torquey and surprisingly responsive, although the 2.0-litre diesel versions are more gutsy.
Standard stop-start ensures it’s pretty efficient, with 49.6mpg fuel economy and 134g/km CO2 emissions – for a company car tax rating of 17 per cent.
Ride comfort does suffer with the larger wheels: you notice potholes and small bumps far more than in other Insignias. Despite its sporty looks, the handling is far from sharp, with numb steering and little in the way of driver appeal. A Ford Mondeo is more agile and more enjoyable to drive.
The biggest downside for this car, though, is its price. Yes, it’s well equipped and stylish, but the SRi VX-Line Red Nav costs a hefty £25,735. That’s far too expensive for an Insignia, particularly when you consider that company car drivers – who make up most Insignia buyers – will be taxed heavily on it.
If you want an Insignia, a £21,985 Exclusiv Nav model – with the addition of 18-inch alloys – makes a better buy.
Share this on TwitterShare this on FacebookEmail