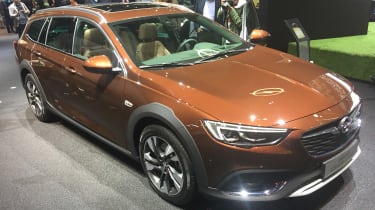 This is the new Vauxhall Insignia Country Tourer, an overhauled range-topper for the British brand’s Insignia Grand Sport large estate line-up. It's now made its public debut at the 2017 Frankfurt Motor Show, alongside the perfomance focused GSi Insignia saloon.

As with the rest of the new Insignia range, the latest Country Tourer manages to grow in size while losing weight; that’s because it shifts to an all-new chassis architecture. It sits at the highest end of the Insignia estate range, with four-wheel drive only and an eight-speed automatic transmission.

A rival for the VW Passat Alltrack and Skoda Octavia Scout, the Insignia Country Tourer gets a modest increase in ride height - around 20mm - and styling tweaks to give it a pseudo-off-roader appearance. There’s a skid plate at the base of the front bumper, black cladding around the wheel arches and along the lower body, and a further skid plate at the rear end. 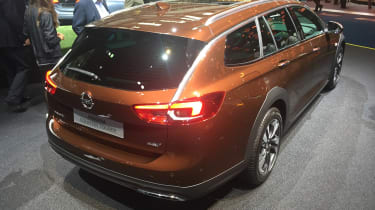 Now the car has been unveiled at the Frankfurt Motor Show, buyers will have to wait until the first half of 2018 for sales to officially begin. As such, Vauxhall has not issued any details on engines, beyond saying that the car will feature a ‘brand new top-of-the-range diesel’; Auto Express understands that this will be a twin-turbocharged, four-cylinder unit producing more than 220bhp.

The rest of the package is similar to the recently launched Insignia Sports Tourer - so compared with the old Country Tourer, you get a 92mm longer wheelbase for improved rear cabin space, and an increased maximum boot capacity - up by 135 litres, to 1,665 litres. The Country Tourer also gets roof rails as standard; they’re capable of carrying loads of up to 100kg.

Standard equipment should be generous, given the Country Tourer’s positioning at the top of the Insignia range. It’ll get Vauxhall’s new IntelliLux LED matrix headlights, and hands-free operation of the rear hatchback, as well as Apple CarPlay and Android Auto integration, along with the OnStar personal assistant system.

No prices have been announced, but we’d expect the Insignia Country Tourer to cost around £32,000 - so it should be slightly cheaper than the Passat Alltrack, while offering more grunt and a heftier kit list.

What do you think of the Insignia Country Tourer? Let us know in the comments below.