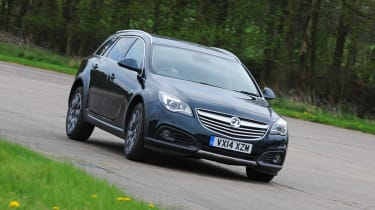 The Vauxhall Insignia Country Tourer is the luxury flagship of the Insignia Sports Tourer estate line-up. It was launched prior to the recent update of Vauxhall’s family car range, although it benefits from the same revisions to the lights and interior as other models. It’s available with two diesel engines: a 2.0-litre CDTi and the range-topping BiTurbo.

This model is only available in an estate bodystyle, and is a rival for the Volkswagen Passat Alltrack, Skoda Octavia Scout and Audi A4 Allroad. At present, all Country Tourer models are four-wheel drive, and powered by a choice of 2.0-litre single and BiTurbo CDTi diesel engines.

All models are very well equipped as standard, including an eight-inch touchscreen infotainment system and FlexRide adaptive dampers, while prices are competitive against its rivals.

Most buyers will opt for the lower-power diesel, which is quite gruff, but has decent mid-range shove and 350Nm of torque to help overcome the car’s 1,757kg weight. The six-speed manual gearbox is a tad notchy, but has long ratios to help it undercut the Passat Alltrack’s claimed fuel economy figures.

The top-spec BiTurbo engine has noticeably more boost when you put your foot down, but is no more refined. The fact that it's only available with a six-speed automatic gearbox that's slow to kick down, means it never feels sporty enough to exploit the extra power.

The Country Tourer’s standard FlexRide adaptive dampers give you a choice of Sport, Normal and Tour modes. However, it all seems like an unnecessary addition, because the stiffer Sport setting doesn’t suit the Country Tourer’s comfort bias, while Tour causes it to pitch and wallow over uneven surfaces. Normal strikes the best comfort and handling balance, although the Passat feels more settled over bumps.

In corners, there’s sharp turn-in and plenty of grip, but there is a bit of body roll. The automatic gearbox shifts down readily, and is fairly smooth. Take it easy, though, and the Insignia is pretty comfortable – especially on motorways.

You won’t get as far off-road as in a proper 4x4, but the extra traction and raised height mean the Country Tourer will easily tackle muddy fields and most tracks.

The Country Tourer is a big, heavy car, but its 2.0-litre diesel engines are fairly frugal. With the six-speed manual gearbox fitted, the 161bhp single turbo version returns a claimed 50.4mpg and 147g/km CO2 emissions.

Fuel economy falls to 44.1mpg and CO2 emissions increase to 169g/km if you opt for the automatic. The BiTurbo engine is only available with an automatic gearbox and returns a claimed average of 42.8mpg and emits 174g/km of CO2, which are high compared to rivals.

As with all new Vauxhalls, the Country Tourer is covered by Vauxhall’s Lifetime warranty. However, don’t be misled by the name. The warranty is the same three-year/60,000-mile cover most carmakers offer, but Vauxhall extends this to the 100,000 miles, but for the first owner of the car only. However, 35 per cent residuals are among the worst in the Insignia range.

Even after six years on sale, the Insignia is a handsome family car, and it arguably looks even smarter as an estate than as a five-door hatch. The rounded nose was facelifted late in 2013, with a wider grille and new lights, while the load carrier’s extended roofline flows smoothly back to the rounded rear end.

The Country Tourer gets the usual SUV-inspired add-ons that mark out a crossover estate. For starters, there’s an extra 20mm of ground clearance. Also, black bumpers and wheelarch extensions, plus silver skid plates front and rear, give a rugged look - although they’re not really designed to fight off-road scrapes. In addition, the Country Tourer gets exclusive two-tone wheels, but overall the off-road additions fit less easily with the car’s rounded shape than they do on the boxy Volkswagen Passat Alltrack.

Inside, the changes over the Sports Tourer are only minor. You get chrome ‘4x4 Tourer’ kickplates for the doors and bright gearlever trim, but apart from the slightly higher seating position, you could be forgiven for thinking you were driving a standard Insignia.

That means the cabin is well built and has a quality feel, while the part-TFT instrument cluster – taken from the Vauxhall Ampera – has a clear display and looks modern. Nav models have an easy-to-use eight-inch touchscreen with clear graphics, although the touchpad behind the gearlever seems like a fussy, less intuitive addition. It doubles as a notepad so you can write letters straight into the system, but the software has trouble distinguishing characters.

The Insignia has a smaller boot than the rival Volkswagen Passat Alltrack, at 540 litres, with 1,530 litres of space with the seats folded. Its clamshell tailgate operates electrically in two stages via a switch on the driver’s door.

The car also has a decent 70-litre fuel tank, ensuring a decent range between fill-ups.

The floor hinges up to reveal a shallow storage area, and rails are standard, although the £110 FlexOrganiser pack adds various useful nets and hooks. The seats fold flat 60:40, but have no boot releases.

Vauxhall predicts most buyers will spec a tow bar (£500), to make use of the manual model’s 2,100kg towing capacity. It’s worth considering the factory-fit option, as it includes a calibration for the ABS to help the car keep better control of a trailer.

The Insignia got a lot more tech as part of its recent update, so while the largely unchanged mechanicals shouldn’t be too much trouble, the electronics may be a cause for concern.

During our time with one version of the Country Tourer, a warning message prevented us adjusting the climate control via the touchscreen, although the conventional controls still worked, and the system reset itself when we turned the ignition off and back on. Of course, any glitches should be covered by the Vauxhall’s warranty, which is up to 100,000 miles for the first owner.

The Insignia saloon earned a five-star Euro NCAP score, and the Country Tourer should be just as safe. There are six airbags, Isofix mounts and tyre pressure monitors, while adaptive cruise, blind spot detection and a rear traffic alert are all on the options list. 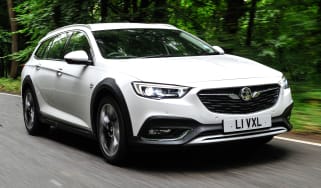 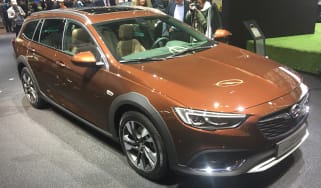 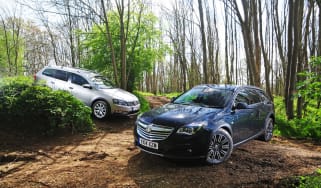 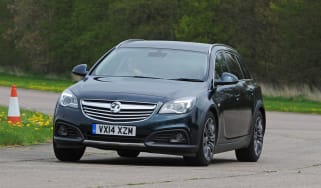 Vauxhall Insignia Country Tourer is a good choice, but BiTurbo version is thirsty
Skip to HeaderSkip to Content