We head on road and off in the rugged, jacked-up Vauxhall Insignia Country Tourer 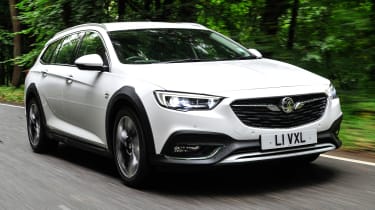 Until Vauxhall decides if it will build a large SUV, the Insignia Country Tourer does a pretty good job of filling the void. While some people may wish for a higher driving position, it’s a capable, comfortable, spacious and well appointed alternative to an SUV. It offers more off-road ability than the majority of owners will require, plus the 2.0-litre diesel is strong and refined. It looks decent value as well. It’s just a pity efficiency takes a bigger hit than it should.

The new Nissan Qashqai-rivalling Grandland X has now taken its place as the staple SUV offering in Vauxhall’s line-up. And with the PSA Peugeot-Citroen takeover of Opel and Vauxhall, the previously planned large SUV appears to be facing an uncertain future.

So, for the time being, if you want a large family car with a raised ride height and a bit of off-road ability from Vauxhall, your sole option will be this: the Insignia Country Tourer. We’re driving it for the first time to see if it makes a viable alternative to full-size SUVs such as the Skoda Kodiaq.

The previous Country Tourer was never a very big seller in the UK, but Vauxhall is keen to give it another go. As well as having a growing glut of SUVs to contend with, the Country Tourer’s closest rivals include the VW Passat Alltrack and Skoda Octavia Scout. 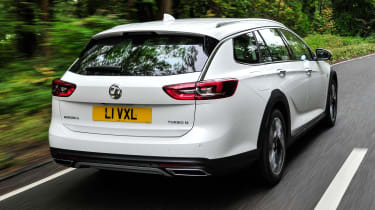 The new model sticks closely to the previous generation’s formula, taking an Insignia Sports Tourer, raising the suspension and boosting the exterior with a mass of functional yet desirable plastic body cladding. Skid plates front and rear add to the off-roader-style image, too, although we’d argue that the mere 20mm increase in ride height may put off some buyers hoping for a more elevated view of the road.

Still, it serves a purpose. Far from being designed solely as a fashion statement, the Insignia Country Tourer – unlike the Grandland X SUV – is available with four-wheel drive. The multi-plate clutch system, manufactured by British firm GKN Driveline, is similar to that found in cars like the Ford Focus RS. There’s no Drift mode, but the electronically controlled torque vectoring means the system is able to boost traction both on the road and off the beaten track.

You can feel the set-up shuffling power between the wheels even on dry tarmac, particularly when planting your foot as you exit a tight bend. Our off-road experience was limited to some muddy tracks, but it left us in no doubt that the Country Tourer would be capable of going much further than a standard Insignia in the rough.

The penalty for this new-found ruggedness becomes evident when you do push harder in a corner, because the softer set-up means that body roll is more pronounced. The standard-fit FlexRide adaptive damper system has been retuned for the Country Tourer, and the result is that ‘Sport’ mode feels anything but sporty. However, the lower centre of gravity means that most full-size SUVs are still more cumbersome. 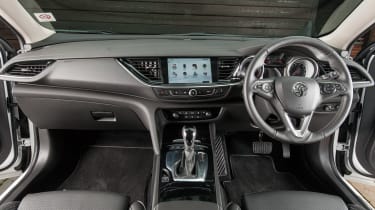 Arguably more important to buyers of this type of car is the ride, which, as in the regular Insignia, is very comfortable, despite a jittery feel over small imperfections. Refinement is strong, too. Under the bonnet, this 168bhp 2.0-litre diesel is the sole engine choice until a more powerful twin-turbodiesel arrives early next year. It’s a really good fit, though, with a decent turn of pace, a flexible feel at low revs and an unobtrusive engine note. But it suffers at the pumps, claiming 43.5mpg, significantly less than the 60mpg of the equivalent Sports Tourer.

The Country Tourer’s cabin is identical to that of other Insignias, although that’s no bad thing, because it’s solidly put together, intuitive to operate and easy on the eye.

There’s only one trim level, but it brings plenty of kit as standard, such as an eight-inch display with sat-nav, 18-inch alloys and Vauxhall’s brilliant On Star concierge service. The options list can inflate the price a little, but the matrix LED headlamps (£1,010), adaptive cruise control (£480) and head-up display (£290) are all reasonable value.

And given that it costs around £4,000 less than the cheapest Passat Alltrack, the Country Tourer looks good value in this class.