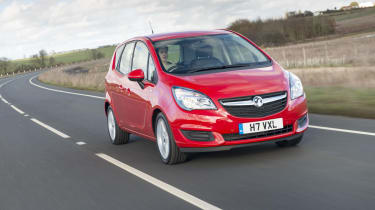 Jump behind the wheel of the Meriva and prepare to be pleasantly surprised – it actually drives rather well, despite a tall body that looks as if it’s going to lean into bends too much, but doesn’t.

On winding roads, the Meriva demonstrates good handling thanks to the blend of well-weighted steering, strong grip and good body control, which all add up to plenty of agility.

Even on the UK’s rougher road surfaces, the car is still reasonably comfortable, with supple suspension soaking up bumps easily. Refinement is strong, too. Road noise is particularly well suppressed, which helps to make long motorway journeys a breeze – although some of the older diesel engines are a little intrusive.

The Vauxhall Meriva has been around a while now, and that’s reflected in its ageing engine line-up.

The entry-level 99bhp 1.4-litre petrol struggles with the Meriva’s bulk and offers a 0-62mph figure of 14.0 seconds. The 118bhp turbo is only a little better – it’s quiet at cruising speeds, but with only 175Nm of torque it needs to be worked hard to make the most of the performance. Vauxhall claims 0-62mph in a leisurely 11.3 seconds.

The 138bhp petrol version is better, but never feels as muscular as its power figure suggests. 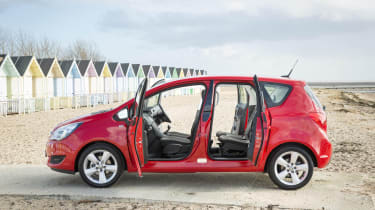 Diesel fans are better catered for, thanks to the introduction of Vauxhall’s new 1.6-litre CDTi unit. It’s available in 94bhp, 108bhp and 134bhp guises and is a smooth and punchy performer. It’s remarkably efficient, too.

Less impressive are the 1.3-litre and 1.7-litre CDTi units. The former musters just 74bhp and carries the Meriva from 0-62mph in a glacial 16.9 seconds, while the latter is clattery and unrefined – although it’s only available with a six-speed automatic transmission. All other models get a positive five speed manual, apart from the 138bhp 1.4 Turbo and all 1.6 CDTi versions, which get a six-speed unit.