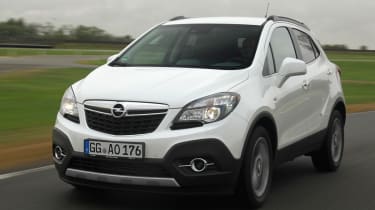 We’ll reserve final judgement on the Mokka until we drive the 1.7-litre CDTi on UK roads, but on this evidence it’s not likely to shake up the fiercely fought crossover class. Chunky exterior styling and a spacious interior aside, the Vauxhall doesn’t bring anything new or exciting to the table. A firm ride, poor refinement and high prices are likely to hold it back.

As you might have already guessed, the Mokka is not Vauxhall’s entry into the coffee market. Instead, it marks the company’s long-overdue arrival in the booming crossover class. We drove a promising prototype back in May; now we’ll find out if the production car, seen here with Opel badging, delivers.

It certainly has its work cut out, with talented rivals like the Skoda Yeti, Nissan Juke and Kia Sportage all proving popular. So where does the Mokka fit in?

Well, it’s closer in size to a Yeti than a Sportage, and makes the most of its compact proportions thanks to some striking off-roader styling. Up front, the wide grille, tall bonnet and oversized lights give the Mokka a wedge-shaped stance. The big wheelarches are filled with 17-inch alloys on all but the entry-level model, while thick plastic bumpers complete the rough-and-tumble looks.

Sadly, the styling verve stops when you climb aboard. While there’s some nice detailing across the dash, the steering and centre console are from the GM parts bin – and the counter-intuitive layout means it’s difficult to find the right button to press while you’re on the move.

Still, the Mokka makes up for this lack of sophistication with sheer space – there’s easily enough room for three adults in the back, and headroom is decent despite the gently sloping roofline.

The seatbases also pop up to provide a flat load bay, while a maximum boot capacity of 1,372 litres means the Mokka is better suited to family buyers than the cramped Juke.

We tested a 4x4 Tech Line model, which comes bursting with equipment and undercuts Exclusiv spec by nearly £2,000. The only engine we could try was the 1.4-litre turbocharged petrol, with 138bhp and 200Nm torque – but it doesn’t suit the Mokka.

We criticised the prototype Mokka’s vague and inconsistent steering, and this hasn’t been fixed on the production model. While it’s quick and weighty enough to feel stable at speed, there’s limited feedback on offer.

Firmly sprung suspension means there’s not much body roll, but the downside is a firm ride that may well be a bit harsh for UK roads.

CO2 emissions of 149g/km and 44.8mpg fuel economy sound reasonable on paper, although fuel efficiency will suffer if you’re working the engine hard by carrying several passengers and luggage.

The cleaner front-wheel-drive 1.7-litre diesel is likely to be the default choice for UK buyers – especially as it’s not only faster than this 4x4 petrol version, but also more efficient, with fuel economy in excess of 60mpg.