You simply can't underestimate the importance of the Vectra to Vauxhall. After all, the firm hopes to sell nearly 50,000 of them in the UK alone this year. As Auto Express revealed two weeks ago, a bold-looking facelifted model is promising to help the race for success. New VXR flagship versions are on the way, and there's an ever-wider range of luxurious options. 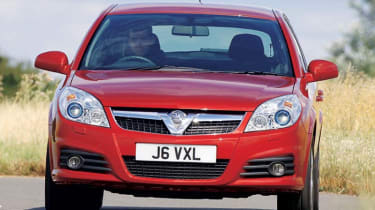 The Vectra isn't a bad car, it simply doesn't excel. While the old model was not ugly, the face-lifted variant is more attractive, with a sharper front end. The surgery hasn't pushed it ahead of key rivals, but equally the Vauxhall isn't the class dunce. And with this 1.9-litre 118bhp diesel engine, it makes a lot of sense - it's economical, well equipped and comfortable.

You simply can't underestimate the importance of the Vectra to Vauxhall. After all, the firm hopes to sell nearly 50,000 of them in the UK alone this year. As Auto Express revealed two weeks ago, a bold-looking facelifted model is promising to help the race for success. New VXR flagship versions are on the way, and there's an ever-wider range of luxurious options.

But does the fresh design include improvements to ride and handling? Auto Express drove one of the first cars to hit UK roads to find the answer.

Rounded headlamps have clearly been inspired by the smaller Astra, while the Vectra's new-look tail-lights and extra chrome give a more upmarket feel. There's a bigger Griffin badge on the radiator grille, which is framed by an even bolder chrome 'V'. While the newcomer certainly appears different to the old car, it's still not the most striking machine in its class.

Inside, the changes are even more subtle than outside, and include a reshaped dashboard and better quality materials. It can't match the high-grade plastics used in the new Volkswagen Passat, although it is as good as its main rival, Ford's Mondeo.

Cabin controls have been updated and they're thoughtfully laid out, while the switchgear feels robust. The new car is practical, too. In hatchback form, the boot is as big as the Mondeo's with the seats up, and there's plenty of legroom for passengers in the rear.

The driving position is comfortable, and there's enough adjustability for tall drivers. Engines are more or less unchanged. Our car's 118bhp diesel is a relatively new addition to the Vauxhall line-up. It remains largely the same as before and continues to offer an impressive blend of both performance and refinement.

Sixth gear is long and makes for relaxed cruising on long motorway trips. Combined fuel consumption is an impressive 49.6mpg, but the loudest thing at 70mph is tyre noise, as the engine is very quiet. The only time you really hear the diesel unit is at high revs or when it's idling.

Vauxhall has fiddled with the chassis - it's been tuned to better suit UK roads and the company is keen to stress that the car can adapt to most types of driving conditions, which is an important factor in the workhorse family saloon sector. The trouble is that the Vectra still isn't very polished to drive, and is certainly no dynamic match for the Mondeo. The steering is too vague, although this isn't quite so important in this class. What is more disappointing is the ride quality - it copes pretty well with uneven back roads, but it wallows through corners and doesn't feel nimble.

Neither of these traits makes for an entertaining drive, though, which is what Vauxhall is aiming for with the tweaked chassis. But it's while on the motorway where the refined engine and soft suspension make the Vectra a much better companion.

And that's entirely sensible, as this is where the updated Vauxhall will spend most of its days, especially in the new Exclusiv trim with the 118bhp engine. After all, with ever-increasing prices at the pumps, you can't argue with a car that is likely to top 60mpg at motorway cruising speeds