Everything you need to know about the upcoming Vauxhall Viva city car, including prices and trim details 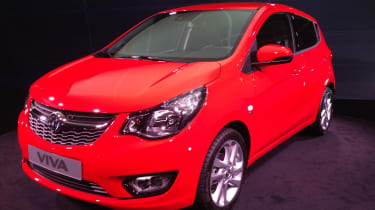 Prices and specs for the new Vauxhall Viva have been revealed – following the city car’s debut at the Geneva Motor Show last month.

Only one engine will be available from launch, with a choice of SE and SL specifications. The entry-level 1.0-litre SE model will cost from £7,995, with the top-spec SL priced at £9,495.

Not all cars will benefit from air conditioning. In order to stay cool this summer you’ll need to spec the SE Air Con trim – or opt for the more expensive SL. That said, all models do get kit such as tyre pressure monitoring, lane departure warning, cruise control and front fog lights as standard.

• Read our first drive review of the Vauxhall Viva here

The standard 74bhp 1.0-litre petrol engine will do 62.8mpg and emit 104g/km, but buyers can also spec it as an ecoFLEX model for tax-busting sub-100g/km CO2 emissions. The addition of both front and rear spoilers, as well as low rolling resistance tyres, helps the Viva SE ecoFLEX emit just 99g/km and return 65.7mpg.

The small city car, which will go up against a growing pool of talented rivals including the Skoda Citigo and new Toyota Aygo, revives the Vauxhall Viva name after a 35-year absence. It’s been designed to slot below the stylish Adam and popular Corsa superminis in an ever-expanding Vauxhall range.

While the Viva name will be reserved for UK buyers, the car will also be sold in mainland Europe badged as the Opel Karl. It’s the first time in more than 20 years that Vauxhall and Opel will use different names for a car in this country and on the Continent. 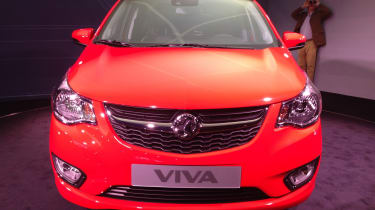 Vauxhall claims there is more than enough room for five people inside, but if carrying passengers isn’t your main concern, it’ll also be available with only four seats – allowing for more shoulder room for adults in the rear. Legroom should be good, too, given that the Vauxhall is 15mm longer than the new Hyundai i10, and a whopping 200mm longer than the Peugeot 108.

• The cheapest cars to run

On the outside, the front end echoes the latest Corsa’s with swept-back headlights and a bold single-bar grille, while the rear offers few surprises. Down the side, Vauxhall has included three sharp creases in the bodywork, with a high shoulder line that rises at the back. 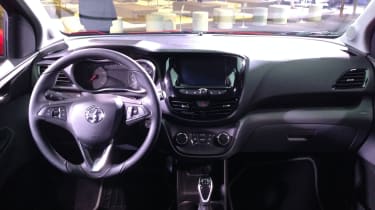 Vauxhall has high hopes for its revamped small car range, hoping to capitalise on Ford’s current weak spots. Tozer said: “We have three small cars and Ford doesn’t. I don’t think it’s a great idea to say can we outsell Ford, but we can give it a good run for its money.”

The original Viva was one of Vauxhall’s most popular cars between 1963 and 1979. At the time, the small saloon rivalled established models like the Ford Anglia and Morris Minor, selling more than 1.5 million units in just over 15 years. It was replaced by the Astra at the end of the seventies, long before the family car ballooned into the Volkswagen Golf rival we know today.

There’s more choice of small budget cars than ever before and the Viva will have its work cut out in making an impact. Here are five of Britain’s cheapest... 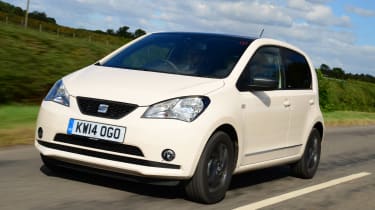 Based on the VW up!, the Mii is more than £500 cheaper than the basic VW. You’ll have to spend extra if you want air-con, though. 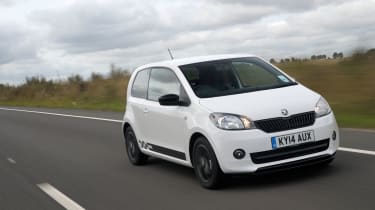 The Citigo comes in at £15 more than the equivalent entry-level Mii – although Skoda beat SEAT in our Driver Power 2014 survey. 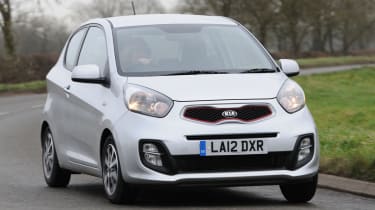 The Picanto packs loads of big car features including electric front windows, a trip computer and an MP3-compatible stereo. 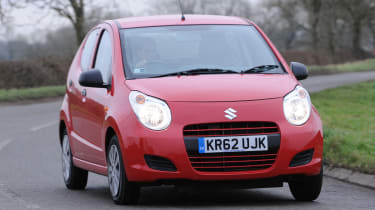 Set to be replaced next year by the Celerio, the Alto is available VAT-free until the end of 2014. That cuts price to £5,999. 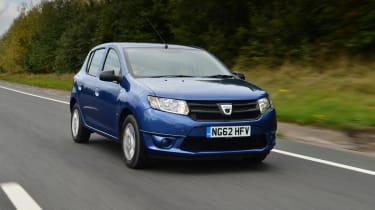 Since its arrival in 2012, the Sandero has held the title of Britain’s cheapest car. Access models do without air-con or even a radio.

Find out more about the Vauxhall Viva's key rivals in our best city cars round-up.

Welcome to our Geneva Motor Show hub page, scroll down for all our Geneva content...
Vauxhall Viva (2015-2019) review 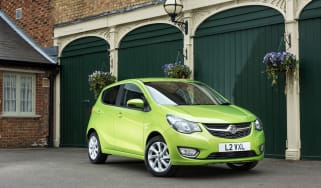