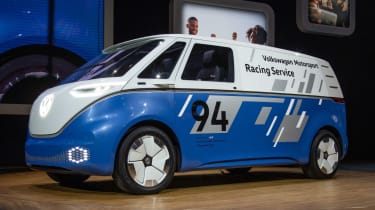 Delivery drivers; are you tired of average vans? Do you wish your job was slightly more automated? Do you want to look like a rogue member of a Pikes Peak support crew? Well, it seems that Volkswagen has plans to ease your plight, as it’s just unveiled its latest version of the all-electric I.D. Buzz Cargo concept; a retro-styled, technology laden, racing-livery clad panel van for the modern age.

Styled to look like the original VW Transporter and wrapped in a design which pays homage to the VW I.D. R Pikes Peak record holder, the Buzz Cargo is powered by a 150kW (or 201bhp) electric motor, which transmits its power through a single-speed transmission to the rear wheels, allowing a top speed of 99mph. An all-wheel-drive version could also be possible in the future, by borrowing technology from the I.D. Buzz Microbus.

Range is quoted between 200 and 340 miles, depending on whether you opt for the 48kWh or the 111kWh battery pack. Charge-times are supposed to be reasonable, too, with the I.D. Buzz Cargo capable of recovering 80 per cent of its charge in 30 minutes with a 150kW DC fast-charger. The Cargo also features a solar roof, able to increase range by 9.3 miles a day. 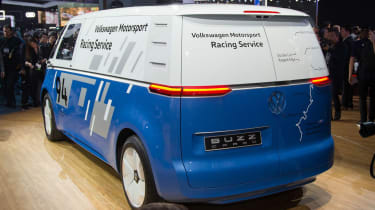 Technology-wise, the I.D. Buzz Cargo will feature keyless entry and go via a smartphone app, an autonomous driving mode called “I.D. Pilot,” as well as an automated stock-tracking system for the shelving in the load compartment.

Controlled by a tablet integrated into the van’s bench seat, the system automatically registers the parcels on board, tracking their type, destination and weight. The system can then plan the most efficient route, taking customer appointments into account and recording the parcels which are delivered.

The system can be operated when the I.D. Buzz Cargo is being driven in autonomous mode, and the driver’s seat can rotate 15 degrees to the right, to allow comfortable operation of the tablet.

Other features for the load bay include an 8.6 square-foot floodlight, a 230V electrical supply for power-tools and a folding workbench.

VW state the I.D. Buzz Cargo could be on sale as early as 2022. Official figures are yet to be announced, but we anticipate a starting price of around £39,000.

Now read our review of the VW I.D. Buzz Microbus Concept. Let us know your thoughts in the comments below…