Volkswagen's mobile robots could replace charging points in the car parks of the future, autonomously searching for EVs in need of charging 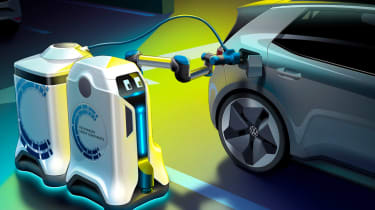 Volkswagen has previewed its new mobile charing robot concept. The German firm says this concept could replace charging points in the car parks of the future, effectively turning any conventional parking bay into an electric car charging point.

The robot is fitted with an array of laser scanners, cameras and ultrasonic sensors which allows it to avoid obstacles, vehicles and pedestrians in the car park. It also features a mechanical arm which can open the electric car’s charging flap and connect the vehicle to the “battery wagon” with a conventional charging cable. 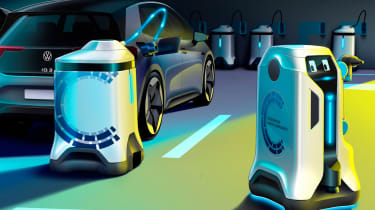 Volkswagen’s proposed “battery wagons” can store around 25kWh of energy each – and each robot can move several devices at once to charge particularly flat or high-capacity batteries. When connected, each energy storage device can deliver up to 50kW DC fast-charging, similar to the hard-mounted, commercially available fast-chargers of today.

The system is also scalable; Volkswagen says multiple robots can be employed to service the same car park, depending on its size. The German brand also claims that, due to the compact nature of the robots and battery wagons, the charging system is well-suited to older parking areas which would be difficult to upgrade with hard-mounted charging points, such as cramped underground car parks.

Mark Möller, Head of Development at Volkswagen Group Components, said: “With  this, we are making almost every car park electric, without any complex individual infrastructural measures. It’s a visionary prototype, which can be made into reality quite quickly, if the general conditions are right.”

By 2025, Volkswagen aims to install a total of 36,000 charging points throughout Europe with the help of its dealer network – a large proportion of which will be publically available. The brand will also soon launch its own home wallbox charging point, called the ID.Charger, to domestically service its ever-expanding range of all-electric vehicles.

What do you make of Volkswagen’s proposed autonomous charging robot? Let us know in the comments section below…