SEAT and Skoda to get small SUVs 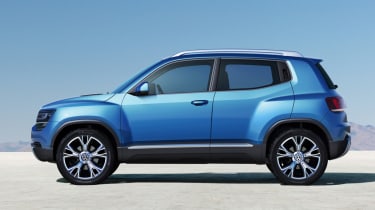 Just as the up! city car appeared as a VW-badged concept first before spawning the SEAT Mii and Skoda Citigo, the new Taigun concept could form the basis for SEAT and Skoda small SUVs. Based on a stretched version of the up!’s new small car family platform, you can read full details on the Taigun here.

“First we need to learn if this concept makes sense in the real world. If the reaction is positive we will realise it, and if we realise it it would make sense to synergise with other brands,” Dr Urich Hackenberg, VW’s head of product development, told us.

As the Taigun shares most of its mechanicals - including its three-cylinder petrol engine, seats, electrical architecture and chassis – with the up!, which in turn is virtually identical mechanically to the Mii and Citigo, it would be a simple transition to spread the costs of this new small SUV over the three brands.

A production version of the Taigun is still a few years off, though. Hackenberg told us that if he pushed the green button on the project today, it would take around two years before the public was able to buy one.

But judging by the overwhelmingly positive reaction from showgoers in Sao Paulo, it can’t be long before VW bosses give it the go-ahead.