Volkswagen shows off a China-only luxury saloon at the Geneva Motor Show, based on C Coupe GTE concept 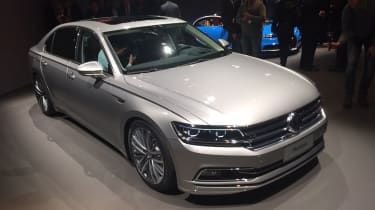 VW has used the Geneva Motor Show for the world premiere of its new 'Phideon' flagship saloon. It's destined for release solely in China, and is engineered and manufactured by SAIC Volkswagen.

In terms of exterior design the Phideon appears to be a stretched and facelifted Passat, but the five-metre long saloon is actually based largely on the C Coupe GTE concept. It therefore gives clues to the next Phaeton, but we're expecting a more dramatic design for that fully-electric saloon.

We're yet to see the interior of the Phideon, but VW claims it's designed to appeal to "dedicated self-drivers", yet offers the necessary space "for use as a chauffeur-driven limousine". To that end the rear seats are electrically adjustable, heated, cooled and have a massage function. 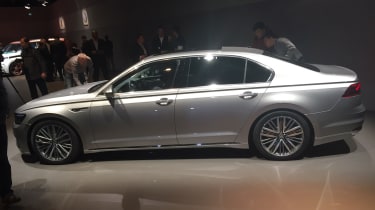 The Phideon also gets an array of tech including an air suspension system similar to that found on a Bentley, with five driving modes, and soft-closing doors. A night vision system warns of hazards ahead at night, while four wide-angle cameras give a view around the car on the central screen.

It debuts with a range of TSI turbo petrol engines, including a flagship 3.0-litre unit with 295bhp. A plug-in hybrid drive system will debut later on.

What do you think of the Volkswagen Phideon? Let us know in the comments section below...

Welcome to our Geneva Motor Show hub page, scroll down for all our Geneva content...
VW to pay customer £25,000 following new Dieselgate ruling