Volkswagen gets in on the pick-up special edition act with its Amarok Canyon packing £8.5k of extra kit 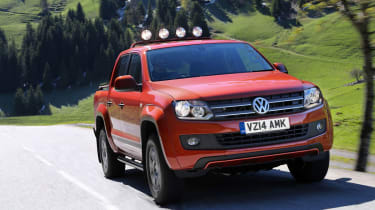 The new VW Amarok Canyon goes on sale on April 1. Limited to just 350 units, the Amarok Canyon is based on the mid-range Trendline-spec Amarok, but VW claims it includes £8,500-worth of extra equipment.

Included as standard on the outside of the Amarok Canyon is some extra rugged body styling, 19-inch ‘Cantera’ alloys, front and rear parking sensors, privacy glass, a protective coating for the load area, a matt black load bay cover and high-gloss side styling bars and rear bumper.

Buyers get the choice of three exterior colours – Copper Orange, Deep Black or Reflex Silver. The roof light bar is available as an optional extra, for £945 plus VAT.

Inside, the Canyon gets grey nappa leather upholstery with heated front seats, orange stitching on the leather-covered steering wheel and gear knob, sat-nav with a six-inch colour touchscreen, Bluetooth and floor mats.

The Amarok Canyon is only available with the top-spec 178bhp 2.0-litre bi-turbo diesel. This produces 400Nm of torque in manual form, and 420Nm as an auto, and gives the truck a maximum towing capacity of 3,000kg as a manual, and 3,200kg as an auto.

Customers will be able to choose from a six-speed manual model with selectable four-wheel drive, or an eight-speed auto with permanent four-wheel drive. Just 50 manuals will be available, with the 300 remaining models featuring the auto transmission.

The manual model can complete the 0-62mph sprint in 11.0 seconds and reach a top speed of 111mph. It returns a claimed 34.4mpg and emits 216g/km of CO2. The automatic model takes 11.3 seconds to sprint from 0-62mph and has a top speed of 108mph. According to VW it can return the same fuel economy figures as the manual, and emits one fewer gram of CO2 per 100 kilometres.

The Amarok Canyon arrives with Volkswagen buoyed by the success of the Amarok Edition, it's previous special edition truck, which sold out all 300 units within four weeks.

2013 was a record year for Volkswagen commercial vehicles that saw the brand's range of Caddy, Transporter and Crafter vans, supplemented by the Amarok pick-up truck, cement second place in the UK commercial vehicle market behind Ford. Over 37,000 sales in 2013 represented growth of 13.4 per cent over the previous year.

The success can be partly attributed to the strong residual values achieved by the VW van range and the knock-on positive effect this has on running costs. The Caddy, Transporter and Crafter all top their classes for retained value according to the latest figures from CAP.