Facelifted Volkswagen Amarok pick-up gets new engines and cabin technology, and starts from £32,493 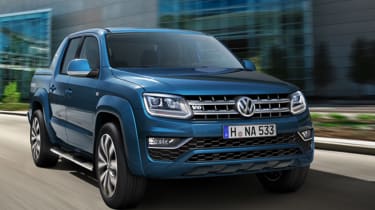 Volkswagen has revealed launch prices for its updated Amarok with order books for the latest pick-up truck now open, with first deliveries set to take place in January.

Prices for the new model start at £32,493 – for that money you’ll be getting the car’s new 3.0-litre V6 TDI diesel with 201bhp, an eight-speed DSG gearbox and a 4MOTION four-wheel-drive system.

Cheaper models will be available further down the line though with Volkswagen set to introduce a 161bhp version with a manual gearbox in 2017. Alongside this will be manual versions of the 201bhp engine, rear-wheel-drive and selectable four-wheel-drive drivetrains and an entry level trim specification called Startline.

The new model’s 201bhp engine means the Amarok manages 0-62mph in 9.1 seconds and a top speed of 114mph, and despite switching to six-cylinder from four, the engines now found under the bonnet are all Euro 6 compliant.

Volkswagen claims the updated Amarok manages 36.2mpg on a combined run, with CO2 emissions of 203g/km for the 201bhp model. 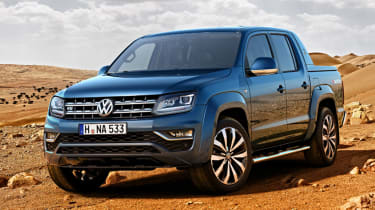 The same 3.0-litre engine will be available at launch with 221bhp (237bhp on overboost), 550Nm of torque and the eight-speed automatic gearbox as standard, priced from £37,581.

A key benefit of this engine is also an improved overall towing capacity. Fitted with four-wheel drive, top spec models will be capable of pulling 3.5-tonnes, up from 3.2-tonnes of the existing version, matching the Navara and beating the L200. 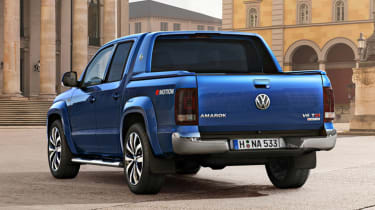 Inside, hefty revisions have been made to the dashboard, which gives a much more premium and car-like look to the interior of the Amarok. The robust but dated heating vents have been ditched in favour of more modern ones, and the whole interior has been made over to give more emphasis to horizontal lines. The instrument binnacle has been given a makeover, too, and features a 3D colour display between the gauges. Volkswagen's infotainment system dominates the centre of the dash, and comes with DAB digital radio as standard. An interesting addition comes in the form of digital voice enhancement, which uses the microphone to pick up on what front passengers are saying and relays it to the rear seats. This means passengers in the rear can hear what the driver or front passenger is saying without any trouble at all. 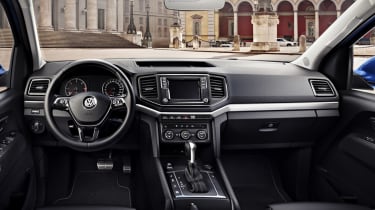 New ergoComfort seats are a major feature of the Amarok's interior. These 14-way electrically adjustable units can be adapted to suit all sizes of driver, and have already won an award from the Healthy Back Campaign, so should provide plenty of cushioning and support for the long-distance driver. They're also optionally heated.

The UK pick-up sector has never been busier and it's about to become more so with the new Toyota Hilux, plus Renault, Fiat, Mercedes and Peugeot/Citroen all with models in the pipeline. It means the revised VW Amarok will have a challenge securing sales.

What do you think of the Volkswagen Amarok's new look? Let us know in the comments section below...