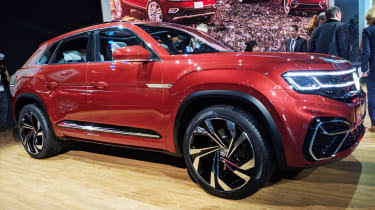 This is the VW Atlas Cross Sport concept. Revealed at this year’s New York Motor Show, it’s a shorter and more coupe-like variant of the mid-size SUV, and will make the transition into a showroom model early in 2019. It’ll first go on sale in the US market, and there's no word on whether it will come to the UK.

Unlike the standard Volkswagen Atlas, the Cross Sport concept only has seating for five. It’s based on the same MQB platform as its bigger brother and features the same wheelbase but measures 190mm shorter to create its sportier stance. 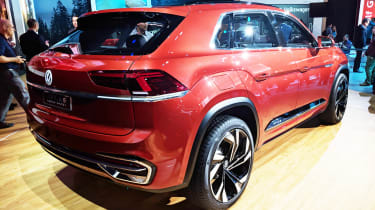 Under the skin VW has also introduced a 355bhp plug-in hybrid powertrain comprising a 3.6-litre V6 petrol engine and two electric motors, powered by an 18kWh lithium-ion battery. VW claims it’s capable of 26 miles of all electric range and can cover 0-60mph in 5.4 seconds.

Alongside the new plug-in hybrid, VW will also launch the Cross Sport with a mild hybrid powertrain. Using the same V6 engine, a smaller 2.0kWh battery will be paired with the motor to allow the engine to switch off when cruising. VW says this powertrain will develop 310bhp and hit 0-60mph in 6.5 seconds.

Should VW bring the 5-seat Atlas to the UK? Let us know in the comments...