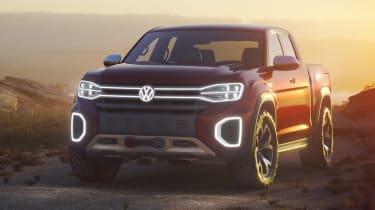 Named after a tree native to the Pacific Coast in the U.S. the concept measures in at 5,438mm long – that’s over 400mm longer than the seven-seat Atlas. It’s based on the same MBQ platform and powered by a 276bhp 3.6-litre V6, which drives through all four wheels and an eight-speed automatic gearbox. VW says 0-62mph takes 8.5 seconds.

• All the latest from the 2018 New York Motor Show

The design of the Atlas Tanoak is separate from the Atlas SUV on which it’s based, with only slight similarities between the two cars. The Atlas Tanoak has a more rugged appearance to match its off-road capabilities with a raised bonnet and rugged underbody protection, which houses a centrally mounted winch and carabiner. 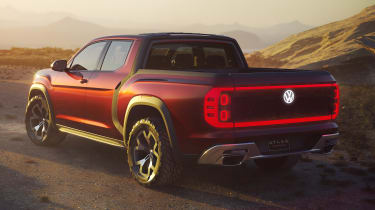 The grille and VW badge are luminated by white light and offer an animated lighting display when the car is unlocked with light running over the grille and into the LED headlight surrounds, while the badge gradually gets brighter. New distinctive six-sided LED daytime running lights are a prominent feature at the front, too.

The rear features a low hinged tailgate, which when opened gives a cargo bed of 2,291mm. Like the front, the Atlas logo has been integrated into the tailgate, which features wraparound animated lighting. Red LED strips on the upper and lower parts of the tailgate move to create three dimensional taillights either side. The lower rear of the vehicle has been designed as both an underbody shield and a diffuser, while a towhook sits above the exhaust.

Inside, the Atlas Tanoak looks production ready. Sporty, contoured seats are used up front to offer support when off-roading while the passengers in the rear are treated to individual seats. 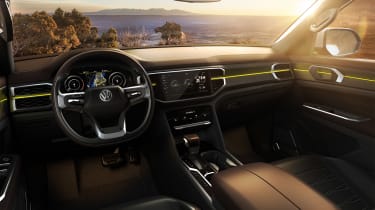 The centre console, steering wheel and instruments have been heavily redesigned from the Atlas SUV. Most of the functions, including air conditioning, are now operated digitally via the touchscreen, which sits high on the dashboard for ease of use. Together with the Volkswagen Digital Cockpit, which sits in front of the driver, it forms a digitalized cockpit environment.

Ambient lighting built into the instrument panel and the roofline console bathe the cabin in light which can change colour from yellow for daytime and blue for night-time depending on whether the vehicle is in Off-Road or City mode.

The centre console features a newly designed shifter grip for the eight-speed automatic gearbox while the Active Control modes can be selected via a metallic slider and has been designed to be used even when the driver is wearing work gloves.

Officially Volkswagen has no plans for the Atlas Tanoak to make production, but they are keen the gauge the reaction of both buyers and the media.

Check out our list of the best pick-up trucks on sale right now...