The Volkswagen Atlas SUV might come to Europe, but can it offer Britons anything more than seven-seat practicality? 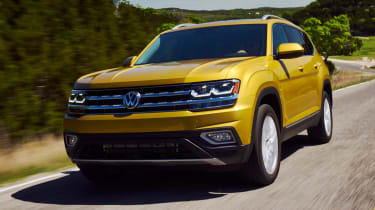 Volkswagen's new US-market Atlas ticks all the right boxes: acres of space, flexible seating, and a ride that won't make the kids sick. The huge SUV handles well considering its size, though the slightly lethargic six-cylinder engine struggles with the Atlas's two-tonne kerbweight. VW says it could bring the Atlas to Europe, though a right-hand-drive version is a long shot for now.

The Volkswagen Atlas is a super-size seven-seat SUV designed for (and built in) America. Volkswagen exec Dr Elmar-Marius Licharz told Auto Express last year that excess production capacity at the Chattanooga, Tennessee plant could bring the Atlas to Europe, though a right-hand-drive version for the UK is unlikely. Even if the Atlas were to make it here, would we want it? We travelled to Texas for a test drive.

The Atlas is over five metres long and nearly two metres wide – slightly smaller than an Audi Q7 – and yet aside from the sheer size, the styling doesn't make much of a splash. The crease that runs over the wheelarches and through the doors feels like a half-hearted (and ultimately doomed) effort to endow the Atlas with some character, though one could argue that the car's subdued appearance is a good fit for conservative American buyers.

• The best 7-seaters on the market 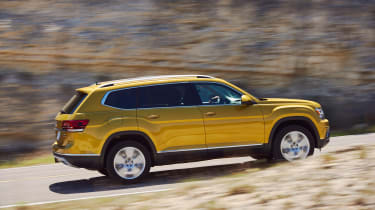 Inside, the Atlas's dash and doors are adorned with wood and brushed-metal trim; Volkswagen rarely makes such attempts at warmth, and it's obvious it hasn't had much practice. The dashboard layout is what we expect: a sensible (and, to current VW owners, utterly familiar) control layout dressed in plastics and fabrics that feel substantial, if a bit drab.

Top-of-the-range SEL Premium models get Volkswagen's new Digital Cockpit dials, which replace traditional analogue gauges with an LCD screen showing everything from speed and revs to maps and trip info. It’s the same system found on top-of-the-range Golfs, and not too dissimilar to the set-up that debuted on the Audi TT a few years ago.

When it comes to seating and functionality, the Atlas is spot on. The SUV's third row is roomy enough for two adults to sit comfortably; something that many of its US-market rivals (and most of the smaller seven-seaters sold in Britain) can't claim. Access is easy thanks to second-row seats that slide far forward, even with a child seat strapped in. The third-row headrests can be dropped down level with the seatbacks, providing an unobstructed view to the rear when the seats are deployed. And there's little reason to fold them down when they aren't in use, as there's adequate boot space behind them for shopping and small suitcases.

The roomy middle-row seats recline and can be adjusted fore-and-aft. A three-place bench is standard, with individual bucket seats – or ‘captain's chairs’ in American marketing parlance – as an extra-cost option. They reduce seating capacity to six, but ease the problem of warring siblings. Both back rows split (50/50 for the third row and 60/40 for the second-row bench) and fold down flat with a minimum of fuss. 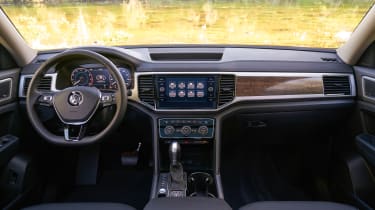 Engine choices include a 235bhp 2.0 four-cylinder turbo and a 276bhp 3.6-litre V6. For the US market, diesels are out of the question, as are manual gearboxes; both engines are paired with an eight-speed automatic. VW only had V6-powered Atlases for us to sample on the launch event, and while the front-wheel-drive version felt quick enough, the all-wheel-drive model, which adds 75kg to the car’s already hefty kerbweight, struggled when we asked for quick overtakes.

We have our concerns about the 2.0T, though they may well be unfounded, as it should reduce weight slightly and it very nearly matches the bigger engine for in-gear torque. It’s only going to be made available in the US with front-wheel drive, but for many buyers that’s unlikely to matter.

Fuel economy and emissions are yet to be confirmed for either model, but estimates for the V6-powered Atlas equate to just 23mpg for the four-wheel-drive car and a barely-improved 24mpg for the front-driven model. It’s here that the four-cylinder version will likely prove its worth. 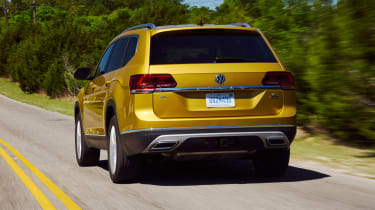 The Atlas's steering feels lighter than we expected, but it responds sharply enough. The suspension is set up for a pillow-soft ride, though the Atlas grips respectably well and stays composed in the turns. We noted quite a bit of road noise, though the coarse Texan roads were partially to blame.

The Atlas competes against other large SUVs not available in the UK, including the Ford Explorer, Honda Pilot and Chevrolet Traverse. And there's a reason those vehicles aren't sold here: they're too big and thirsty for the average British family. We're impressed by the Atlas, but it was clearly designed with Americans, not Britons, in mind.