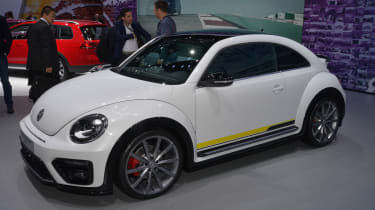 Volkswagen has revealed four new concept versions of the VW Beetle at the 2015 New York Motor Show, which it says are “tailored for diverse target groups of people who share a love for one of the most charismatic cars of our times.”

The Beetle R-Line, Denim, Wave and Pink Edition models reveal the scope of personalisation options available and could eventually lead to production versions.

Arguably the most feasible of the four Beetle concepts is the VW Beetle R-Line Concept. Volkswagen already markets several R-Line models in the UK – from the Golf right up to the Touareg – so a sportier-looking Beetle model could be a logical next step.

The Beetle R-Line concept is based on the Beetle hatch, and features Oryx White Pearl Effect paint, chunky bumpers and 20-inch Monterey alloy wheels. There’s also a large rear spoiler, high-gloss body mouldings and a black diffuser. To emphasise its sporty nature, the Beetle R-Line is 14mm wider than the standard production car. 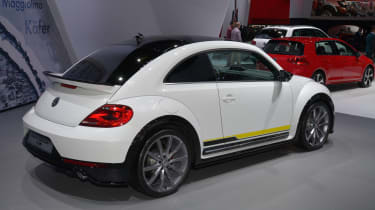 Inside the R-Line gets sports bucket seats, glossy black seatbelt shells and leather-carbon trim. The dials are finished in a contrasting yellow, as is much of the interior stitching. It also boasts the 217bhp turbocharged 2.0-litre engine from the current Golf GTI.

Next up is Beetle Cabriolet Denim. It features a denim-coloured convertible roof, as well as Stonewashed Blue Metallic paint. VW says if the car made production it would be available with nine other colour options – though it’s likely all would feature the dark blue roof and 18-inch alloy wheels. 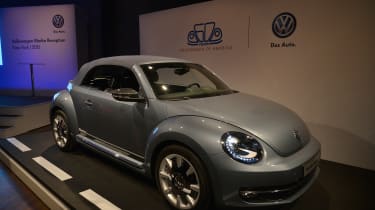 Naturally, the use of denim extends to the car’s interior, too, with blue sports seats and door panels, as well as unique trim for the steering wheel, gear lever and front centre armrest. The concept car features a 168bhp 1.8-litre TSI petrol engine, though European cars would inevitably be available with lower-powered diesels, too.

Following the convertible theme is the Beetle Cabriolet Wave. Designed for drop-top drivers with a love of surfing, the Wave gets a Habanero Orange paint job, 19-inch Tornado alloy wheels and R-Line bumpers. Inside there’s classic fabrics and a surf board-inspired wood dashboard panel. 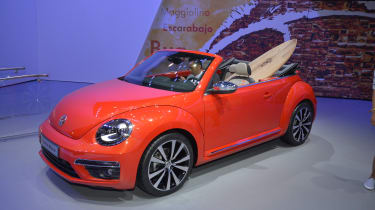 While none are officially confirmed for production – let alone for UK sale – they could all hint at future production models. Volkswagen bosses will use the show to judge public reaction, describing all four as “near-production concept cars”. 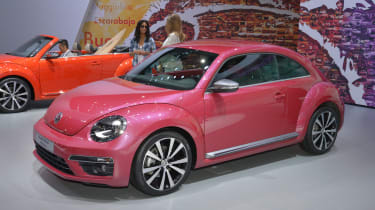 There’s never been a better time to snap up a reimagined classic, but is the MINI Cooper or VW Beetle a better buy?
Volkswagen Beetle review 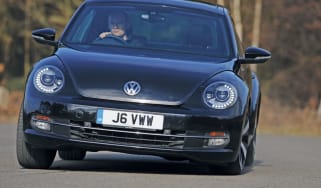