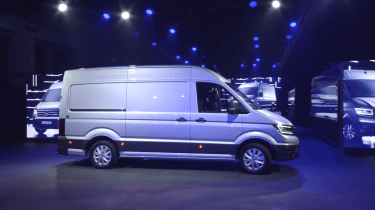 Volkswagen has begun taking orders for the new Crafter van, after its debut in September last year. The panel van will be offered in a choice of three trims, with prices starting from £23,920 excluding VAT.

The new Crafter offers up plenty of choice when it comes to body sizes, with three different lengths available – 5.9m, 6.84m or 7.39m. This combines with three roof heights – 2.35m, 2.59m or 2.79m to give a flexible load area accounting for most needs. Overall load volumes haven't yet been announced, but expect them to be competitive with the likes of the Ford Transit or Renault Master.

There’s also a wide range of engine options. All Crafters will come with a 2.0-litre TDI engine, but a choice of four power outputs – starting at 101bhp, and going up through 120bhp, 138bhp and range-topping Bi-TDI 175bhp units. That's competitive with the likes of the Fiat Ducato, which offers power outputs from 115bhp to 177bhp. 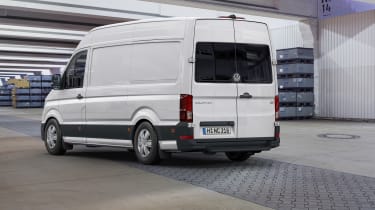 Different engines will be available depending on which drivetrain is chosen – the new Crafter is available with front, rear, or all-wheel drive - unique in this sector - and customers can also choose between manual or DSG automatic gearboxes.

The Crafter begins with entry-level Startline trim, which offers Bluetooth, cross-wind assist, 180-degree opening rear doors and a system that can detect a drowsy driver.

Step up to Trendline trim and the rear doors fold 270-degrees back on themselves, while inside drivers get cruise control, DAB radio, a multi-function steering wheel, autonomous emergency braking, electric door mirrors, and a wooden rather than rubber floor in the load area. Trendline prices start from £25,270 excluding VAT. 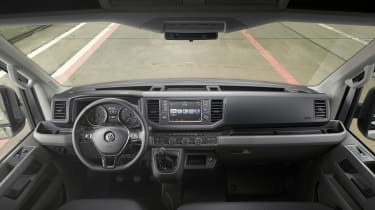 If you’re feeling particularly upmarket, you can turn your workmanlike panel van into something more akin to an executive saloon by perusing the options list, which offers artificial leather seating, heated seats, Discover navigation system, a rear-view camera.

The new Crafter will make its UK debut at the commercial vehicle show in April, with first deliveries starting in May. Order books are open now for front-wheel drive, manual models, with other variants becoming available as the year progresses.

The all-new Volkswagen Crafter has been officially launched at a VW event. The new van, which will rival the likes of the Ford Transit, Fiat Ducato and Mercedes Sprinter offers a range of efficient 2.0-litre diesel engines and optional four-wheel drive.

While the previous Crafter shared a body and platform with the Mercedes Sprinter, the partnership has ended and so the new model is unique to Volkswagen for the time being. It's had the full gamut of Volkswagen technology thrown at it, and will be built at a brand-new plant in Poland specifically made to build Crafters.

The new Crafter has the standard Volkswagen ‘family face’, which seems to translate quite nicely onto a larger, boxy vehicle. Lying behind the corporate grille is VW’s familiar 2.0-litre diesel engine, found across its van and passenger car range. It’s now Euro 6 compliant, and will be available in four power outputs – 100bhp, 120bhp, 138bhp and a bi-turbo unit with 175bhp. 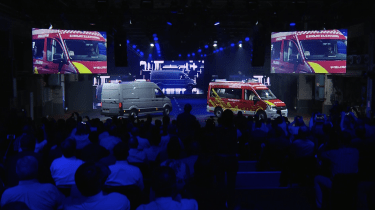 Despite the usual boxy shape, the new Crafter will have the lowest drag coefficient in its class, at just 0.33. That makes it more slippery and aerodynamic than any other large van in production, and should pay dividends in fuel economy and emissions.

Get all the latest van news and reviews on the Auto Express van channel...