New Volkswagen Golf SV aims to stem the flood of SUV sales and make a splash in the MPV market. Can it see off Citroen and Kia? 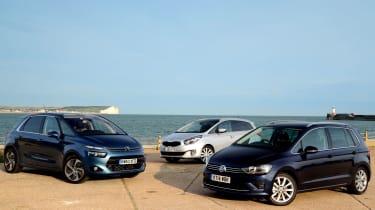 If you’re in the market for a family car, you’ve never had more choice. Whether you want a traditional hatch, a rugged SUV or a trendy crossover, there’s something for all tastes and budgets.

MPVs are perhaps the most versatile of the lot, but while they effortlessly mix space, practicality and low running costs, they’re increasingly being edged out in the sales charts by crossovers and SUVs.

Leading the fightback is the new Volkswagen Golf SV, which blends the upmarket desirability of the standard hatchback with a more roomy and flexible interior. Plus, crucially, it aims to banish the memory of its lacklustre Golf Plus predecessor.

Setting the standard in this class is the bold Citroen C4 Picasso. It combines futuristic styling with a vast, brilliantly packaged interior, and deserves its place on any family car shopping list.

The wildcard in this pack is the Kia Carens. It matches the VW and Citroen for size and price, plus comes crammed with standard equipment. Yet open its boot and pull a couple of fabric straps, and it’s transformed into a seven-seater. Will that be enough for it to take victory in this space race?

Click the links above to read individual reviews, and scroll down to find out the winner of this triple-test... 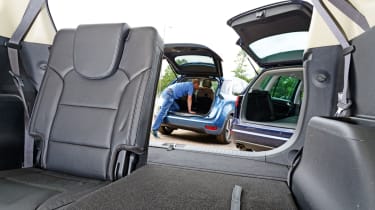 The Carens is the only car here to seat seven – although the third row is cramped and so best suits kids. All three models feature a sliding rear bench, letting you choose between greater legroom or more load space. However, the C4 also has three full-size seats, each with its own Isofix mounting.

Finally, both the Citroen and Kia get a fold-flat front passenger seat, allowing them to carry loads up to two-and-a-half metres long. 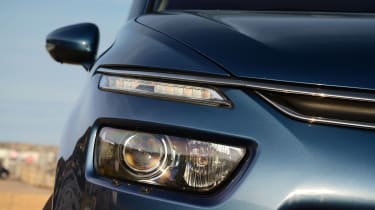 Want to stand out from the crowd? The daring Citroen is the car for you. Unlike the simply styled Kia and anonymous Volkswagen, the Picasso looks distinctive from every angle. It’s a similar story inside, with its quirky dash, bold shapes and eye-catching colours.

Family cars need to be as easy on the wallet as they are spacious and practical – and the Kia and Citroen make strong cases for themselves. The Carens is the cheapest car to buy and groans under the weight of its standard kit. The C4 costs a bit more, but low emissions and fine mpg will ultimately help you save. 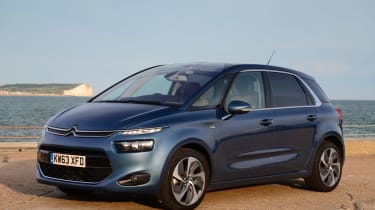 It’s a second win on the trot for the C4 Picasso, which effortlessly blends innovative styling with unrivalled practicality and low running costs. Adding to its appeal are a long list of standard kit, a thoughtfully designed interior and one of the most relaxing driving experiences money can buy. And if you really need three rows of seats, an extra £1,445 gets you a Grand C4 Picasso. 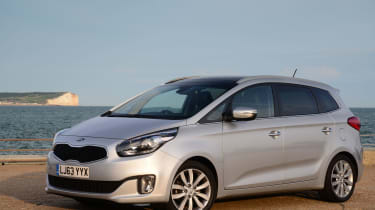 The Carens is great value for money, smartly styled and comes with the added bonus of a seven-seat layout. It’s also backed by an industry-leading warranty and comes packed with equipment. Yet the 1.7-litre CRDi diesel engine is off the pace in terms of performance and the cramped third row of seats is for occasional use only. 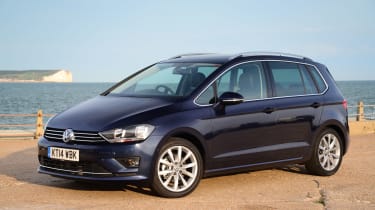 As with the standard Golf hatchback, the beautifully finished SV is refined, good to drive and oozes upmarket appeal. Yet it’s not as spacious as rivals, while not as much effort has been put into the layout of the interior – it simply feels like a scaled-up Golf hatch rather than a versatile people carrier. It’s also more expensive to buy and not as well kitted out as its rivals.