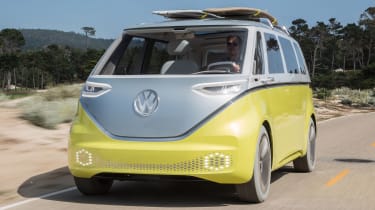 Volkswagen boss Herbert Diess has confirmed that the retro-styled I.D. Buzz ‘Microbus’ concept will morph into a production car by 2022. Diess made the announcement at the concept’s debut at the Pebble Beach Concours d’Elegance.

The I.D. Buzz was first shown at the North American International Auto Show in Detroit at the start of this year, and the reaction was so positive that the German carmaker has decided to bring it to life. It’ll follow on from a production version of the I.D. electric hatchback, set to launch in 2020 and form part of a family of bespoke EVs. Bosses intend to shift one million electric vehicles annually by 2025.

Built on the brand’s MEB modular EV platform, the autonomous concept takes many design cues from the Type 2 Microbus of the 1950s. Speaking at the 2017 Geneva Motor Show, VW design boss Oliver Stefani told Auto Express: “We would like to bring this back because it fits so well to what the brand stands for: it’s emotional, it has functionality, it makes your life easier.”

“With the MEB platform this is the chance now to get the proportions back,” he added, referring to the fact that you don’t need to have an engine in the front with an EV. “But you can also get much more interior space, almost one class higher.”

Although not officially confirmed, it’s thought that the I.D. Buzz minivan will be the figurehead for Volkswagen’s upcoming Uber rival, MOIA – a ride-sharing company set to launch in 2020.

Described as a vehicle that “transfers a Microbus feeling into the future”, the I.D. Buzz clearly draws inspiration from the classic and iconic Type 2 Microbus, which was launched in 1950. Its 2017 interpretation includes retro design cues such as the two tone paintjob, blunt front end and large VW badge, but the space-age interior, huge 22-inch wheels and wraparound LED lights modernise the design. 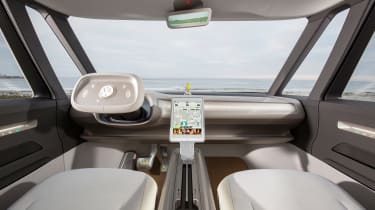 It sits on an extended version of the MEB modular electric platform, with a 3.3m wheelbase, short overhangs and boxy shape designed to maximise space.

It’s expected to eventually be offered in panel van and camper van conversions, too, with VW claiming a rear-wheel drive model with a reduced output of 268bhp could be offered here. It’ll still be capable of 0-62mph in eight seconds, however.

The wheel at each corner design allows the I.D. Buzz to offer a flexible eight-seat cabin, with a lounge-style layout, multi-adjustable rear chairs and a driver’s seat that swivels 180 degrees. This happens automatically when the autonomous I.D. Pilot mode is selected, retracting the single-piece capacitive touch steering wheel while the car takes full control of the driving.

Other tech includes an augmented reality head-up display and a removable portrait tablet that controls the car’s functions. 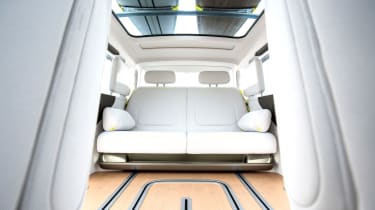 The I.D. Buzz’s architecture means the batteries and motors sit beneath the floor, allowing two luggage compartments front and rear. It’s all-wheel drive, with an electric motor on each axle and a combined system output of 369bhp.

VW claims a 0-62mph time of five seconds and a limited top speed of 99mph, plus an NEDC-rated driving range of up to 373 miles. It also features inductive charging tech, giving an 80 per cent battery boost in 30 minutes.

The lithium-ion battery pack ats as part of the car’s structure in the floor, in turn lowering the centre of gravity. Rear air suspension and adaptive dampers aim to deliver high levels of comfort, while the 10-metre turning circle is a result of rear-wheel steering.

Are you excited about the Volkswagen I.D. Buzz? Let us know in the comments section below!